No soldiers inside Ghazanchetsots before the strike: the video is old

At the time of the explosion, there were military objects near the church, and soldiers inside: Azerbaijani media

On October 8, at around 1 pm, Azerbaijan targeted the St. Ghazanchetsots Church in Shushi. The roof of the church was damaged by the first blow. A few hours later, around 5:30 pm, the church was hit the second time.

The Azerbaijani side denied the news about hitting the church first officially, then on information platforms. Moreover, the Azerbaijani state news agency put the responsibility on the Armenian side. Later, Azeri experts stated that there were military facilities near the church at the time of the explosion, and soldiers inside.

However, the information spread in the Azeri and Russian media that there were allegedly soldiers in the church had nothing to do with reality.

After the strike a number of Russian and Azeri media outlets announced refererring to a video spread by Armenian users that there were soldiers inside the church. The Russian media spread the post of Alexander Kots, a journalist of the Russian “Kosmomolskaya Pravda”, on his “Telegram” channel, that the strike came after the video of the soldiers praying in the church was spread on the Internet. And during the program “Evening with Vladimir Solovyov” on “Russia 24”, Azeri political scientist Saad Kadyrova stated that the strike at the church was justified, because at the time of the strike there were soldiers “praying”.

Minutes after the strike, the video was published on the website and “YouTube” channel by Hraparaktv.am with the headline “Soldiers in Shushi before leaving for the battlefield.” The video shows that several soldiers are participating in the liturgy. The news outlet mentioned neither the time of shooting the video, nor the source. This gave the media a greater opportunity to comment on the video in the desired light.

In fact, the video was spread before the hostilities, on September 20, but it became widespread only after being spread by “Hraparak.” On the other hand, the claim that the blow was caused by Hraparak spreading the video is also not true, as it appeared on Hraparak’s pages at least 20 minutes after the first strike, which already excludes the hypothesis that the church was targeted after the video.

The video was shot two weeks ago

The video that was widely spread on the network on October 8 was published on October 1. It was posted by @harutyantajar (Temple of Resurrection) Instagram user. The video was shot during the September 20 liturgy at St. Ghazanchetsots Church in Shushi. Another shot of the same video was published by the user on September 21. According to the source, there are recruits in the video. The day before the strike, the video was spread by another “YouTube” channel as well.

The same people are seen in the videos published on different days, which once again proves that the video is two weeks old. 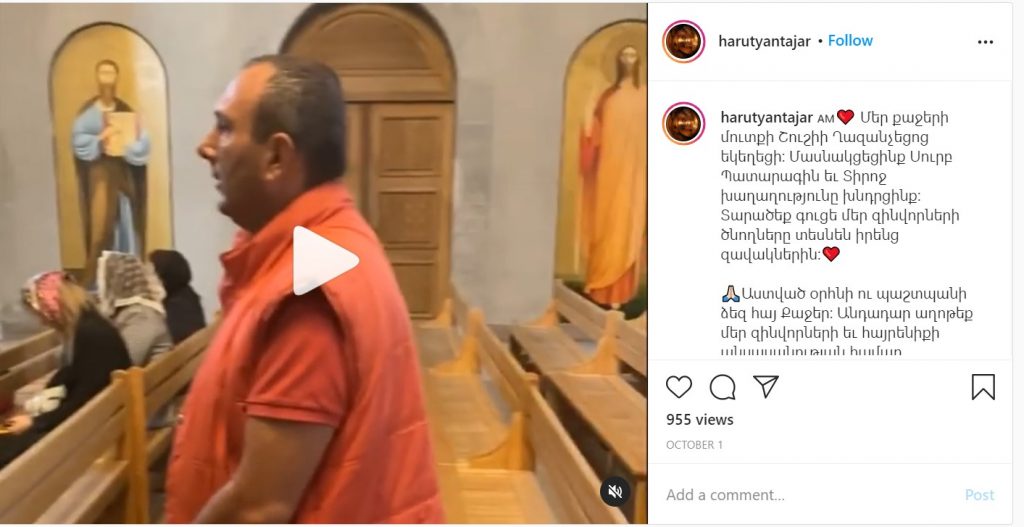 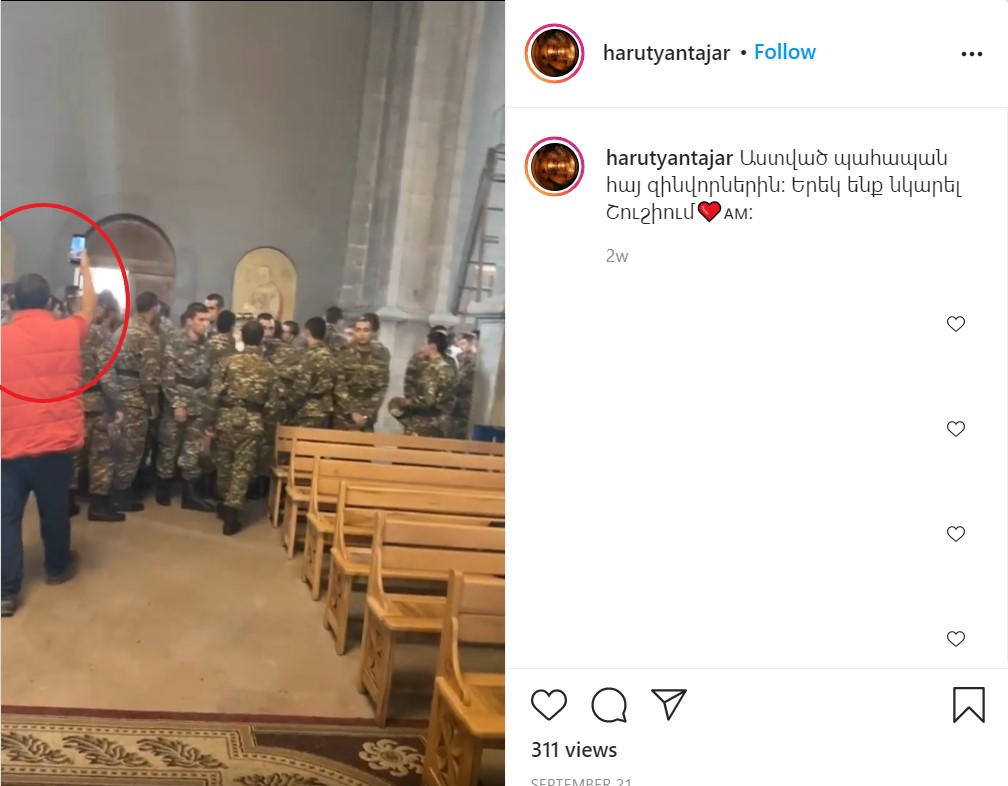 On October 9, Alexander Kots spread a new post on his Telegram channel, writing that the video was actually shot on September 27, but was posted online on October 8, which may have led Azerbaijan to decide to hit the church. In this post too the journalist of “Kosmomolskaya Pravda” made a factual mistake.

Facts from the “scene”

About 10 minutes after the first blow, the journalists of the “Fact Investigation Platform”, who have been working in Artsakh for seven days, were in Ghazanchetsots Church. There were no soldiers or other representatives of the Armed Forces in the area. At the time of the blow, there were 5-6 women and children in the church shelter. Our journalists met them in one of the shelters in Shushi. The women testified that there were no other people in the church besides themselves, including the military. In the video, a resident of Shushi, who was inside the shelter, tells what the situation was in the church at the time of the strike.

In a conversation with Fip.am, the priest of Ghazanchetsots Church, Father Andreas Tavadyan, said that the last liturgy in the church was on September 20. “No one was inside the church at the time of the blow. “There was only a family sheltered in the basement under the tabernacle, ,” says the priest, noting that at the time of the second blow, three people were injured in the church, whom the priest himself helped to get out of the church. Some Russian journalists, however, reported about ten wounded. According to the statement of the Ministry of Foreign Affairs, two Russian journalists and their escort were injured, one of them was taken to Yerevan.

Shortly after the strike, the photos taken inside the church prove that these days the church has not served as a military facility, there is no military equipment here, nor it was a gathering place for soldiers. We, the journalists, can also testify to it as we have been in Shushi for days. There was no movement of military equipment in the city, no one shot from here, as they claim from Azerbaijan. And during the second blow, as already mentioned, there were only journalists in the church.

Moreover, Azerbaijan has been targeting Shushi for days. The missiles of “Smerch” volley system are increasing in the streets day by day, Azerbaijan is firing irregularly at the city, causing great damage to the civilian population. You can familiarize with the article we prepared about the shelling of Shushi by Azerbaijan here.

The state propaganda machine of Azerbaijan often gets entangled in its own lies, contradicting its own statements. On October 27,...

Trump receives incorrect information or does not receive it at all. How long did the ceasefire hold in Artsakh?

Speaking to reporters in Pennsylvania on October 26, US President Donald Trump said that the ceasefire announced on the same...

During the month-long war in Artsakh, military cargo shipments from Turkey and a number of other countries to Azerbaijan continue....

In an interview with Fox News on October 25, Azerbaijani President Ilham Aliyev once again made false statements that have...

The state propaganda machine of Azerbaijan often gets entangled in its own lies, contradicting its own statements. On October 27,...

Trump receives incorrect information or does not receive it at all. How long did the ceasefire hold in Artsakh?

Speaking to reporters in Pennsylvania on October 26, US President Donald Trump said that the ceasefire announced on the same...

During the month-long war in Artsakh, military cargo shipments from Turkey and a number of other countries to Azerbaijan continue....

In an interview with Fox News on October 25, Azerbaijani President Ilham Aliyev once again made false statements that have...