Corona Year: Consequences of the infection that “changed the world”

At the beginning of 2020, when the coronavirus began to spread in a number of countries, it was impossible to even imagine what was awaiting the whole world in the near future. And although many countries closed their borders, the virus spread to all countries of the world, eventually abandoning “native” China.

The Fact Investigation Platform summarized the corona year 2020, the economic, social and other consequences of the infection.

In the first months of the spread of the infection, the main source of a new type of coronavirus was China. At first the infection was not taken seriously by either the people or the public authorities, but as the number of cases increased, the attitude changed.

The 80,000 cases recorded in China were long considered the peak of the spread of the infection. However, months later it became clear that this country of about 1.5 billion people would be one of the least affected countries. One year after the coronavirus outbreak in China, there were 6 infected and 3 dead per million people.

According to scientists, the “source” of the coronavirus is the bat, which passed it to humans, probably in one of the markets in Wuhan.

In mid-February, the infection spread from China to Italy, and it became the so-called “European” center for the spread of the coronavirus infection. The health care system in the country, which was not ready for the infection, almost did not manage to serve the patients with coronavirus. In a short time, thousands of people died in the country due to the infection, and Italy suspended travel to and from the country. In contrast to China, the death rate in Italy was quite high – 1338 people per million inhabitants or more than 80 thousand deaths in one year.

Global restrictions to reduce the spread of coronavirus

After Italy, the virus spread rapidly throughout the rest of Europe and around the world. In March-April, cases of coronavirus were registered in all continents of the world, and restrictions were imposed.

This has had a major impact on both the global economy and the mental health of people due to mobility restrictions. Those restrictions varied depending on the country – from mild restrictions to curfew. Measures restricting human contact and movement had some effect on the rate of spread of the infection, but easing restrictions to prevent economies from collapsing have not allowed countries to get rid of the virus altogether.

About 90 million people became infected with the coronavirus, and about 2 million died in one year.

The coronavirus had a major economic impact of on the whole world. The International Monetary Fund predicted the worst economic downturn in the world since the Great Depression. According to the World Bank, the 4.3% economic decline recorded in 2020 was the highest since 1945. That year a 9․8% decline was recorded. The bank forecasts about 4% growth for 2021, but warns that these forecasts are highly uncertain.

The coronavirus had a particularly strong impact on travel agencies and entertainment industry.

According to the World Tourism Organization, world tourism in 2020 reached the level of 1990 or, in other words, suffered a decline by 70-80%. The number of international arrivals decreased by about one billion. About 120 million jobs in the tourism sector were put at risk during the year. 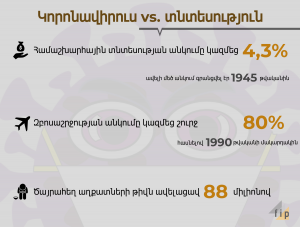 At the end of the year, the World Bank reported about the dangers of rising extreme poverty in the world. According to the report, the number of extremely poor people may increase by 88 million in 2021, compared to 2019.

The virus also affected the nature

Due to the restrictions imposed, the amount of greenhouse gases emitted into nature decreased by more than 7% or 2․4 billion tons during 2020. It turns out that this indicator is the biggest decline recorded in the observed period. However, this is a recorded short-term impact․ Carbon dioxide emissions will increase again in 2021. Closing factories, suspending public and air transport operations and other factors contributed to this indicator.

In anticipation of the effect of vaccines

According to many researchers, the only way to “get rid” of coronavirus is to develop an effective vaccine. According to others, it will continue to live with humanity, as has been the case with a number of other viruses.

In a short time, the development and production of several hundred vaccines began in a number of countries. By the end of 2020, Russian Sputnik V, American Moderna and Pfizer, and other vaccines had already been piloted. Before the New Year, coronavirus vaccines were introduced in a number of countries. And although the vaccinations started only a month ago, there are already some problems with them. In particular, deaths have been reported in several European countries after coronavirus vaccination. It turns out that the elderly are more vulnerable. However, this issue still needs to be studied.

Vaccines were expected to be approved and administered by the end of 2020, after which the epidemic situation in the country could change, but in one of the countries most affected by the coronavirus (Great Britain), a mutation of the infection was recorded, which is 30-50% more contagious than the previous strains. Due to this, a number of countries in the world have suspended air communication with Great Britain, and the United Kingdom has tightened the quarantine regime. However, the new strain of the infection is spreading in different countries, and has even reached neighboring Georgia.

In 2020 Armenia had the highest mortality rate since 1988

The year 2020 had a great impact on the demographic situation in Armenia. First, the coronavirus pandemic that broke out...

Coronavirus in the South Caucasus: A brief comparison

On November 30, Georgia surpassed Armenia in the total number of coronavirus infections. Likewise, the number of daily cases registered...

Azerbaijan and Turkey against global ceasefire

In March of this year, when novel coronavirus pandemic was announced in the world, UN Secretary General António Guterres called...

In 2020 Armenia had the highest mortality rate since 1988

The year 2020 had a great impact on the demographic situation in Armenia. First, the coronavirus pandemic that broke out...

Coronavirus in the South Caucasus: A brief comparison

On November 30, Georgia surpassed Armenia in the total number of coronavirus infections. Likewise, the number of daily cases registered...

Azerbaijan and Turkey against global ceasefire

In March of this year, when novel coronavirus pandemic was announced in the world, UN Secretary General António Guterres called...