Armenia’s economy is highly dependent on remittances (transfers, loans, investments, etc.), and therefore, foreign investments are  direct stimuli to economic development. That is why governments have always tried to make the country attractive to foreign investors.

After the revolution, the new government repeatedly stated that one of the outcomes of the revolution was having a safe, predictable economy for foreign investors, ensuring absence of patronage and establishing rule of law.

A few months after the revolution, in an interview with the Russian RBC TV channel on January 29, 2019, Prime Minister Nikol Pashinyan stated that the effect of the revolution could already be observed. As an example, the Prime Minister noted that in the third quarter of 2018, foreign direct investment exceeded the index of the same period of the previous year by 50%.

It should be reminded that according to the Central Bank, in July-September 2018, the foreign direct investments in Armenia amounted to USD 77.9 million, and in the same period of 2017 they amounted to USD 51.6 million.

Taking into account the fact that the Central Bank recently published updated data on the balance of payments, the Fact Investigation Platform decided to study the statistics of foreign direct investment in Armenia since independence.

In the reports of the Central Bank, the starting year is 1993. The amount of investments made in the country that year was insignificant – only USD 800 thousand.

In the following years, investments began to grow with some fluctuations, and in 2003 they amounted to USD 122.9 million. We can even claim that in 1998, there was an investment boom in the country. That year, USD 232.4 million was invested in Armenia, which exceeded the index of the previous year by about 4.5 times. 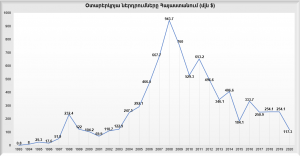 Since 2004, investments have been growing rapidly, and in 2008 there was a real investment boom, when the amount of foreign investments in Armenia during the year made up about USD 950 million.

Thus, after the revolution, the new government promised an unprecedented investment boom. However, in the last 3 years, foreign direct investment not only did not increase, but also decreased by more than two times last year, recording the lowest indicator in the last 18 years.

On March 31, 2018, the leader of the "Yelk" faction of the National Assembly Nikol Pashinyan started a march protesting...

As early as in 2019, Prime Minister Nikol Pashinyan stated that Armenia had overpassed Georgia in terms of GDP per...

The Russian Defense Ministry announced on February 25 that the Iskander missile systems were not used during the Nagorno-Karabakh conflict....

The population of Shushi since the 19th century: Why the number of Armenians declined

During a question-and-answer session with the government in the National Assembly on January 20, Prime Minister Nikol Pashinyan stated that...