On May 13, the Spokesperson for the US Department of State Ned Price referred to the recent events in Syunik on his official Twitter microblog.

“We are closely following reports of increased tensions along a non-demarcated portion of the Armenia-Azerbaijan border,” he wrote, adding that they understand communication between the parties is ongoing and urge restraint in de-escalating the situation peacefully.

We are closely following reports of increased tensions along a non-demarcated portion of the Armenia-Azerbaijan border. We understand communication between the parties is ongoing and urge restraint in de-escalating the situation peacefully.

However, it is noteworthy that Ned Price mentions in his post that the tensions are along a non-demarcated portion of the Armenia-Azerbaijan border, while evidence shows that the Azeris have intruded a few kilometers inside the internationally recognized borders of Armenia. This is also proved by the geolocation of the Azerbaijani positions described below.

At the same time, some Armenian media outlets went to the opposite extreme, claiming that the Azerbaijani army had reached a distance of 2 km from the village of Verinshen. This assertion is proven wrong by the very footage published by the media outlets.

In the afternoon of May 12, it became known that the Azerbaijani armed forces had advanced in the area of Lake Sev in the Syunik Province. This was confirmed by the Ministry of Defense, which noted that negotiations are underway to resolve the issue.

During the meeting of the Security Council convened in the evening, Acting Prime Minister Nikol Pashinyan stated that the Azerbaijani Armed Forces had crossed the state border of the Republic of Armenia in the area of Lake Sev, and had penetrated 3-5 kilometers into the territory of Armenia, trying to enclose the lake.

After the extraordinary session of the Security Council on May 13, the Acting Prime Minister announced that about 250 servicemen of the Azerbaijani Armed Forces are currently inside our state borders in some sections of Syunik and Gegharkunik provinces. Pashinyan informed that Armenia is going to turn to the Collective Security Treaty Organization.

After news on what happened were received, a number of media outlets went to the scene, managing to photograph the Azerbaijani forces which are now in the territory of the Republic of Armenia. One of the media outlets is Tert.am. On the morning of May 13, they published a video titled “Azerbaijanis on a hill 2 km straight from Verishen” in which a hill and unidentified people could be seen.

In the mentioned video, there is a communication radio tower, which could not be found in Google Earth system, as the most recent satellite photos in that part of Syunik were taken in 2018-2019․ This tower was probably installed recently (after the site became an interstate border). However, we managed to geolocate the hill (coordinates 39.59774528094339, 46.2871870835796). 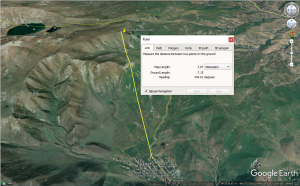 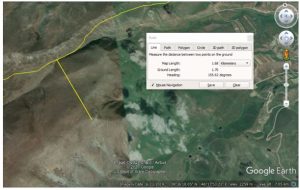 It turned out that the shot was taken from the same place as the other videos.

Later, it became clear from the video published by Zangezur TV that the Azeris had retreated from these positions, and the footage already shows Armenian troops on the hill.

However, contrary to the report by Tert.am, the mentioned height is not 2, but about 6 km away from Verishen village.

In another video, a person in military clothes points to the Azerbaijani positions in a conversation with a journalist.

The first position he shows is at the top of the hill, where there is a tent, the second is on the mountain road leading to Lake Sev. 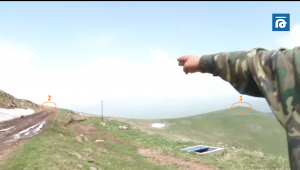 In the other video shots, we see the same hill again in the background, as well as the road in the distance. 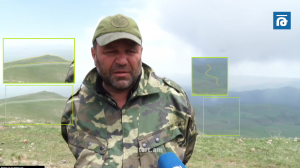 Guided by those objects, as well as the lakes in the background, we can identify the hill and its coordinates. 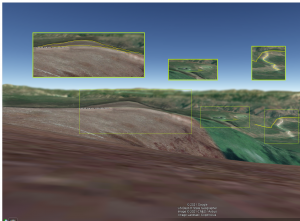 We managed to geolocate the position of the Azerbaijani soldiers, namely, that they are 3 km away from the lake in a straight line, and 4.6 km away by road. The latter is the very distance that the Azerbaijani troops crossed through the territory of Armenia. The locations of the Azerbaijani armed forces are indicated by circles on the map. 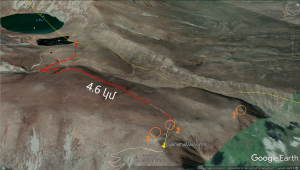 In fact, the Azerbaijani forces have intruded into the territory of Armenia and gone deep into the rear. That those territories are Armenian  is visible not only on the Google map, but also on the map of the USSR General Staff.

In other words, the statement of the spokesperson for the US Department of State that the tensions are along the non-demarcated portion of the Armenia-Azerbaijan border is wrong, because the tensions are deep in the territory of Armenia (at least 1.6 km in a straight line, and about 4.6 km by road from the border).

Two kilometers from the village?

As we have already mentioned above, Tert.am reported on May 13 that the Azeris, who had crossed the state border of the Republic of Armenia on the morning of May 12 and moved forward, are now on a hill 2 km (straight line) from the Verishen village in Syunik Province. The article also included a video, where a hill and unidentified people could be seen.

Pashinyan’s statement about up to 3.5 km

At the May 12 extraordinary session of the Security Council, Acting Prime Minister Nikol Pashinyan stated that in some sections the Azerbaijani army had penetrated 3-5 km into the territory of Armenia.

Most likely, he meant the 3,200-meter-high peak south of the Sev Lake (east of Mount Ishkhanasar), which, according to some rumors, has also been occupied by the Azerbaijani army. Nevertheless, the Fact Investigation Platform did not reveal relevant evidence-based information.

In the press release issued by the Kremlin on the Pashinyan-Putin telephone call on May 14, Russia’s position on whether the tensions are taking place in the territory of Armenia or Azerbiajan are unclear.

Instead, French President Emmanuel Macron has made a clear statement about what happened, writing on his Facebook page that “Azerbaijani armed forces have intruded into the Armenian territory and that they must withdraw immediately.

On September 29, Azerbaijani drones again crossed the air border of the Republic of Armenia and launched strikes  in the...

Russian Military Police Deployed in Gyumri, despite the RA MoD and the signed agreements

The headquarters of the Southern Military District of the Russian Armed Forces have recently issued the following statement, “A military police...

During the “Nation-Army 2017” conference in April, Defense Minister Vigen Sargsyan introduced the “I am” and “I have the Honor”...

Religious Organizations shall Be Separate from the State. Constitution

Recently, on the occasion of the 20th anniversary of the establishment of the spiritual leadership of the Armed Forces, RA...