Immediately after the revolution, Nikol Pashinyan made a number of promises , particularly that the newly elected authorities would support the businessmen, “eliminate political obstacles” hindering business development, and in general would release businessmen from “any kind of corrupt obligations.”

In June 2018, Prime Minister Pashinyan announced that he had released the businessmen from “bringing suitcases of money to 26 Baghramyan”, moreover, he concluded that not demanding the money simply ment gifting them to the businessmen.

“I said, dear businessmen, I do not know what exactly you brought, how many times a month and in what size suitcases you had to bring that to Baghramyan 26, but from now on you are relieved of those obligations. I asked if there was such a mechanism before and they said yes, there was,” mentioned Pashinyan

Taking into account that recently, the 2020 reports on the expenditures of the parties’ financial resources were published, the Fact Investigation Platform decided to examine the donations made to the “Civil Contract” party, as well as the direct and indirect connections of the donors with the authorities and business.

Revenues of the “Civil Contract” party

Before moving on to donations to the ruling party, let’s understand how much donation is allowed to be made to political parties, and in which cases donations are prohibited.

Among these people is Hrachya Sharoyan, nephew of famous businessman Samvel Aleksanyan. The Sharoyan is the 100% shareholder of “Alex and Holding” LLC. It is noteworthy that this company is also in the list of the companies that donated “Kamaze” vehicles to the Yerevan Municipality in 2019. The company affiliated with Alexanyan donated three “Kamaz” trucks to the municipality.

Semyon Sukiasyan from Tashir, who is a 19% shareholder of “Sardela” LLC, is one of the donors of 10 million drams to the “Civil Contract”. This company is registered at 69 Teryan Street, Yerevan, together with “Tashir Group of Companies” belonging to Samvel Karapetyan.  Razmik Chitchyan, director and owner of “Armholding” LLC, which has been receiving export privileges from the government, is a symbolic 1% shareholder of the company. “Armholding” received the last export  privilege in 2017 for a period of four years, which ends in 2021.

The name of Arthur Poghosyan, one of the donors of 10 million drams to the Civil Contract Party, is linked to the name of the famous Davit Galstyan also known as “Patron Davo” who sells weapons. The companies belonging to Galstyan and Poghosyan are registered at the same address. A few months ago Hetq newoutlet wrote about the connection between the two. 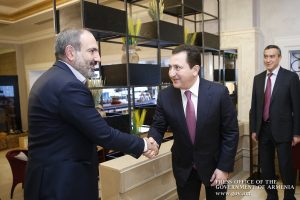 Poghosyan is the founder of Innovation Technology Systems LLC, which owns 99% of Armenian Smart Airlines. The company was founded in 2019 in Yerevan, and according to the description is engaged in the production of unmanned aerial vehicles. Through its source ”Hetq” inquired for Poghosyan from representatives of the UAV industry in Armenia, but they said they did not know any company or person of that name.

It is interesting that “Innovation Technology Systems” LLC is registered at 73 Bagratunyats Street, Yerevan, which is the territory of “Neutron” factory (“Neutron Research and Production Association” CJSC) belonging to “Patron Davo”. The fact that Poghosyan is a director and shareholder in companies in which the employees of the company belonging to Galstyan worked or are working also speaks for Arthur Poghosyan’s and David Galstyan’s connection.

One of the donors of ten million drams is Andranik Sergey Gasparyan, about whom we could not find information.

A number of interesting donations

Gohar Muradyan and Gabriel Jemberjyan transferred 5 million drams each to the “Civil Contract” party. The latter is a member of the Board of Trustees of the Hayastan All-Armenian Fund and the founder of the Pyunik Foundation (together with Serzh Sargsyan’s brother, Levon Sargsyan). In total, Jemberjyan has donated 25 thousand dollars three times (a total of 75,000 dollars) to the “My Step” charity foundation. Taking into account that the patronymics of some of the donors are not included in the report, it was not possible to find solid information about Gohar Muradyan, who transferred five million drams.

The list of donors of the ruling party includes the Secretary of the Security Council Armen Grigoryan and the deputy of “My Step” faction Babken Tunyan, who donated one million drams each. Former Minister of Labor and Social Affairs and a parliamentary candidate from “My Step” Zaruhi Batoyan, transferred 500,000 drams to the party.

Another similar donation is noteworthy. In this case, donations were made by two companies, “Apaven” and  “Eurocup” owned by two partners Gagik Aghajanyan and Arsen Ghazaryan. The first company transferred 5 million drams to the party, the second – 500 thousand drams. Aghajanyan and Ghazaryan had business ties with businessman Gagik Tsarukyan, who is the leader of Prosperous Armenia party.

Gegham Baklachev, the deputy director of the Italian “Renko” company building the Yerevan Thermal Power Plant, transferred 500,000 drams to the CCP. After the revolution, in the fall of 2018, the company came to a final agreement with the government to build a new power unit at the thermal power plant. The construction works started in 2019.

5 million drams was donated to the party by TS Construction LLC, which in December 2020 received a three-year water use permit for industrial purposes in the Shengavit administrative district of Yerevan. It should be mentioned that the director of the company Arsen Mikayelyan is the fellow villager of Gegharkunik governor Gnel Sanosyan.

Among the donors of five million drams is “Alvina Hotel Complex” CJSC, which received a permit from the Ministry of Environment for the reconstruction of “Alvina” residential complex in Tsakhkadzor. It is interesting that in 2019 the Tsakhkadzor municipality fined the company four million drams for not completing the construction work on time.

One million drams was transferred to the “Civil Contract” by “Hitex Plastic” company, which belongs to Samvel Tumanyan, the son of the Ambassador of Armenia to Iran Artashes Tumanyan.

It is interesting that in 2020,  one million drams was transferred  to the CCP by the “Arantsk” LLC belonging to Gagik Arushanyan, the father of Goris Mayor Arush Arushanyan. The same amount of money was transferred by “Armtex Group” LLC, which received a privilege from the government in 2019 and 2020.

Sevan sugar factory also transferred one million drams to the party . The factory that closed down in 2009 was ready to reopen in 2018, and after the revolution Prime Minister Pashinyan promised to support the opening of the factory several times.

HAEKSHIN Construction (ANPP Construction) also transferred 500,000 drams to the party. In August 2019, on the occasion of the Builder’s Day, Nikol Pashinyan awarded the director of “ANPP Construction” CJSC Ashot Vardanyan with a commemorative medal.

In summary, we can state that two years after the revolution, many individuals and organizations associated with the former authorities are still making donations to the ruling party.

It is noteworthy that in some cases, donor organizations have received various benefits from the government.

On March 31, 2018, the leader of the "Yelk" faction of the National Assembly Nikol Pashinyan started a march protesting...