A number of high-ranking officials of the Prosecutor General’s Office own considerable property despite the fact that they have held public positions for many years. The study of the property and income declarations submitted by these officials reveals quite interesting facts about the movement of their property and that of their family members.

The real estate registered in the name of the family members of the Deputy Prosecutor General Hayk Aslanyan is increasing year by year. This is evidenced by the declarations submitted to the Corruption Prevention Commission. 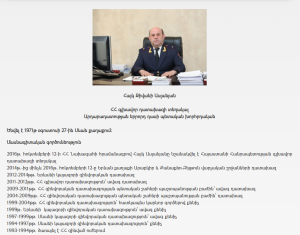 In 2012, when assuming the position of military prosecutor of the Yerevan Garrison, Aslanyan declared 2 apartments, 1 Toyota RAV 4 car, AMD 200 thousand and USD 59,000 in cash and a salary of AMD 3 million.

In 2016, when Aslanyan was appointed Deputy Prosecutor General, in the declaration submitted to the Committee on Ethics, he declared one apartment, one private house, one VOLKSWAGEN car, AMD 3 million, USD 17,000 in cash, AMD 12․4 million in salary, AMD 29,600 worth of shares.

In the 2020 annual declaration, the real estate and money owned by Aslanyan did not undergo significant changes. It again included one house, one apartment, AMD 3.7 million, $ 4500 in cash, as well as AMD 13 million in salary, and a 0․00019% share at “Armeconombank”.

The funds owned by Tatoyan are quite remarkable, as the latter was a researcher at the Department of Histology of Yerevan State Medical University and, as we mentioned, her annual salary was only AMD 2․1 million.

The following year (2013), Marina Tatoyan made four transactions related to real estate, one of which was the alienation of real estate for AMD 10 million, the other was inherited in-kind property worth AMD 5 million. Information on the other two transactions is protected and is not accessible. Tatoyan declared AMD 11 million, USD 57,000 and EUR 43,000 in cash, as well as a salary of AMD 2.6 million. 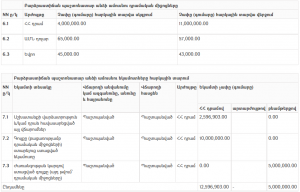 We can learn from the declaration submitted in 2016 that Marina Tatoyan sold two units of real estate, one of which was alienated for AMD 25 million, and the other was probably alienated as a donation, as the amount is not mentioned in the declaration. Instead, Tatoyan received a public building worth AMD 1․5 million as a donation. In the same year, Tatoyan deposited USD 10,000 in the bank, as well as declared AMD 7.5 million, USD 51,000 in cash, and received a salary of about AMD 5-6 million.

In 2020, Tatoyan declared 3 units of real estate (shared ownership), but the date of their acquisition is unknown. Tatoyan also declared a deposit of USD 10,000, AMD 11.7 million and USD 7,000 in cash, as well as a salary of USD 2.6 million received from Yerevan State Medical University.

In 2019, 19-year-old Jivan Aslanyan declared 4 units of real estate: one private house owned by him, one apartment he inherited, as well as one garage donated and one apartment. That year, the latter took the two deposits he had invested in the bank, worth a total of $ 20,000. As a result, Jivan Aslanyan had USD 7000 and AMD 4.5 million in cash at the end of the year.

Taking into account the fact that Jivan Aslanyan did not mention anything about his income, we can assume that the latter does not work anywhere. We learn from the Agency for State Register of Legal Entities that in January of this year Aslanyan became a 50% shareholder of “BayzonJam” LLC. The company sells goods online. The other 50% shareholder of the company is Vahagn Dilbaryan, the author of the book “100 Business Secrets”.

The number of real estate registered in the name of Jivan Aslanyan gives room for a number of speculations. As soon as he became an adult, he became the owner of 4 real estates at once, two of which he received as a donation. Donor information is again unavailable.

As we mentioned, in 2020, two real estate donation deals took place between Jivan and Anahit Aslanyans, as a result of which Anahit Aslanyan donated a private house worth AMD 90 million to her brother.

It is again unclear where Anahit Aslanyan got a house worth AMD 90 million, as she has not submitted a declaration since 2017, although, according to Article 34, Clause 8 of the Law of the Republic of Armenia on Public Service, the adult family members of the declaring official shall submit declarations.

Hayk Aslanyan’s eldest daughter, Anahit Aslanyan, has so far submitted only one declaration (in 2016). That year, the latter bought a BMW X5 car worth $ 27,000, as well as received an in-kind donation worth AMD 25 million.

And again, it is unknown where the Prosecutor General’s daughter got $ 27,000 from and who donated the amount of AMD 25 million.

From the declarations of 2017 and 2018 submitted by the other daughter of the Aslanyans, Rima Aslanyan, we see that the latter does not own any real estate, any car or money.

There are regular publications about the property of Prosecutor General Arthur Davtyan. 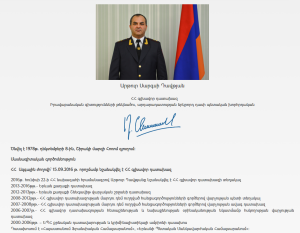 For example, a few days ago, Arsen Babayan, a board member of the Homeland Party and a representative of the “I Have Honor” Alliance, posted a photo of a private house belonging to Arthur Davtyan on his Facebook page, noting that the private house is “estimated at USD 800 thousand to 1 million based on the most modest calculations.”

Meanwhile, back in 2017, responding to media reports about Davtyan’s private house, the Prosecutor General’s Office stated that it was built at the expense of real estate sales, sale of agricultural products, and loans, and according to a declaration submitted by the Prosecutor General, the house was acquired with AMD 43 million (appr. USD 90 thousand).

As for the property declared by Prosecutor General Arthur Davtyan, in 2020 the latter declared 2 residential houses, 3 land plots, AMD 12.7 million in cash, AMD 19.4 million in salary, and other income.

In 2013, as the prosecutor of Yerevan city, Arthur Davtyan submitted the first declaration of property income, according to which the latter had one private house, one apartment, three land plots, AMD 8 million in cash. As income, Davtyan mentioned a salary of AMD 8.1 million and income of AMD 6.9 million from the sale of property.

In 2017, Davtyan sold his apartment for AMD 19 million, his car for AMD 8 million, and he also took a loan of AMD 12.5 million, and built a residential house for AMD 43 million. The previously mentioned statement by Arsen Babayan referred to this private house.

Davtyan’s wife, Ani Davtyan, declared 5 land plots in the 2020 annual declaration, to which she has a right of shared ownership. It is not clear when these lands were acquired, as the date of acquisition is protected information in the declaration, but they started to be declared in 2019. Davtyan’s wife also declared AMD 3 million in cash, as well as a salary of AMD 531 thousand received from Yerevan State University.

Last year, Arthur Davtyan’s father, Sargis Davtyan, declared 3 plots of land in Shirak Province as a joint property, 1 residential house, and he also has shared ownership right for 1 residential house. The latter also declared 3 passenger cars (Hyundai, GAZ and Lexus) and 1 truck (ZIL). And in 2020 he declared AMD 6.3 million in cash, as well as AMD 8.3 million in salary, pension and income from the market.

Arthur Davtyan’s mother, Smella Davtyan, is considered a co-owner of 3 plots of land and one residential house. The latter declared a pension of AMD 390 thousand, as well as a bank deposit of USD 9000, which she had not mentioned in the previous declarations. Harutyunyan has been working in the state system since the 90s, holding positions in the Ministry of Justice, the Prosecutor’s Office and the Special Investigation Service.

In 2015, when Harutyunyan was the Deputy Prosecutor General, according to the submitted declaration, he had 9 units of real estate: 1 residential house, 2 apartments, 4 plots of land, 1 public building and 1 other real estate. In the same year, Harutyunyan declared AMD 56.7 million in cash, as well as a salary of AMD 6 million, and an income of AMD 5.4 million from payment of rent.

In 2019, the number of real estate owned by Armen Harutyunyan increased by one item, but when it was acquired and at what price is not known, although Harutyunyan was obliged to provide the information on the acquisition of the property in his previous declarations.

In 2019, Harutyunyan declared 10 units of real estate: 2 apartments, 1 garage, 2 non-residential areas of an apartment building in the center of Yerevan, 1 private house in Kotayk Province, 3 plots of land, as well as one public building in Tavush Province. 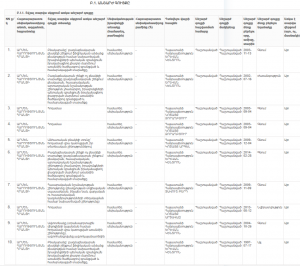 That year, Armen Harutyunyan also declared a bank account balance of AMD 530,000, AMD 47.7 million in cash, a salary of AMD 12.5 million, and AMD 6.1 million received from payment of rent.

Аccording to the declaration, in 2020, Armen Harutyunyan sold the building in Tavush Province for AMD 5 million. Instead, he opened a $ 20,000 deposit bank account.

Harutyunyan’s wife, Yarmaloyan Arusyak, had declared a salary of AMD 940 thousand in 2019. Yarmaloyan, like her husband, opened a deposit account of AMD 10 million and USD 200 in 2020. It should be noted that before that, Arusyak had not declared anything except her salary.

Thus, it should be noted that the amount of property and money submitted in the declarations of a number of high-ranking officials of the Prosecutor General’s Office and their family members is quite inexplicable, taking into account the fact that the latter have held public positions all their lives and have no other sources of declared income.