Arshak Karapetyan, who was appointed First Deputy Minister of Defense on July 20 by the decision of the acting Prime Minister Nikol Pashinyan, and his family have acquired impressive property during Karapetyan’s military service.

There is little information about Karapetyan’s biography on the website of the Ministry of Defense. According to the available information, he served in the Armed Forces of the Republic of Armenia in 1993-2018. During the April 2016 war, Karapetyan was Head of Intelligence Department of the General Staff. After the war he was dismissed from his post by the decree of the third president Serzh Sargsyan, and then was appointed military attaché of Armenia in Russia. During the administration of the revolutionary government, Arshak Karapetyan first became an advisor to the Prime Minister, then he was appointed Deputy Chief of the General Staff of the Armed Forces, and on July 20, he was appointed Deputy Minister of Defense.

The Fact Investigation Platform studied the number and origin of the property related to Arshak Karapetyan and his wife. 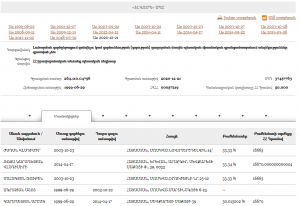 Staff of the Government, the National Assembly, the Office of the President, the Ministry of Foreign Affairs, embassies operating in Armenia, many large taxpayers have used the services of the “Elcomp” in different years. “Elcomp” supplied video surveillance, fire-fighting, entrance control systems, radio communication means from well-known Polish, Russian and Japanese manufacturers.

According to the Armeps procurement system, in 2016-2021, contracts worth about AMD 209 million were signed between state agencies and Elcomp, most of which are contracts signed with the Ministry of Defense. “Elcomp” has already signed contracts worth AMD 47.3 million with the Ministry of Defense this year alone. The company has a key role in the acquisition of property by the Karapetyans.

The office of Elcomp LLC is located at 76/3 Baghramyan Street, Yerevan, next to “Barekamutyun” metro station. According to the Cadastre Committee, the property belonged to a state-owned and then a privatized company (Metrobuildrepair OJSC) until 2004, which later sold it due to poor financial situation.

Metrobuildrepair OJSC was founded in 1996. One of the shareholders and director of the company is Hrant Hakhnazaryan, who is a businessman in the field of construction, a shareholder in several construction companies. Prior to the deal, the property was pledged to Ardshininvest Bank for a $ 17,000 loan agreement. According to cadastral documents, the 168-square-meter building was sold to Eduard Badalyan, a resident of Yerevan, in 2004. The latter managed this property for only a week, after which Badalyan signed a property sales and purchase agreement with Arshak Karapetyan’s wife, Rosa Karapetyan.

Acquiring the property from Metrobuildrepair OJSC for AMD 15 million, Eduard Badalyan sold it to Karapetyan for AMD 35.5 million (at the time of signing the sales and purchase agreement, Karapetyan had transferred all the money to Badalyan). Besides Karapetyan, the buyers of the property also included citizens of the Russian Federation Vladimir Zhadan and Narine Hakobyan. It is worth reminding that Zhadan is also one of the shareholders of Elcomp LLC. In February 2005, Narine Hakobyan and Vladimir Zhadan authorized Rosa Karapetyan to sign a lease agreement on their behalf, and under that agreement the area was handed over to Elcomp LLC for $ 300 a month. Last year the contract expired and it continues to operate indefinitely. Rosa Karapetyan acquired the land of this area in a separate deal for about AMD 3.3 million. According to the data available in the Cadastre Committee, as of 2020, the area is already 173 square meters.

The area of the Yerevan metro to the general’s wife

In 2014, the real estate at 76/7 Baghramyan Street was transferred to Elcomp LLC. The signing of the sales and purchase agreement was preceded by lawsuits between the Karen Demirchyan Yerevan Metro and Elcomp. According to the lawsuit, in 2007 the director of the metro Paylak Yayloyan signed an agreement with “Elcomp”, according to which later the corresponding building of the “Communication House” distribution network, a building with an area of 60 square meters and a 111 square meter plot of land, passed to “Elcomp”. According to the agreement signed between the Metro and Elcomp in 2007, the latter was obliged to dismantle the high-voltage and low-voltage equipment of the “Communication House” complex substation and move it to the “Communication House” substation, receiving the building and the area from which the equipment was dismantled. 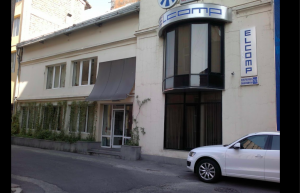 As of 2013, the relevant property was estimated at AMD 15.2 million, but the real estate was not transferred to Karapetyan’s wife, after which she applied to the court, stating that the installation of the substation had been done properly, Paylak Yayloyan had signed the act, and the Metro was obliged to alienate the relevant territory. On September 16, 2014, the Court of First Instance of Arabkir and Kanaker-Zeytun Administrative Districts upheld the lawsuit and demanded that the Yerevan Metro sign a sales and purchase agreement with Elcomp. The contract was signed on November 25, and the land and the building were transferred to “Elcomp”. The value of the deal was AMD 12.4 million.

The cadastral value of the private house was estimated at AMD 32.8 million, and the address was provided by the municipality in July 2018.

Rosa Karapetyan did not declare the garden house

In 2006, Rosa Karapetyan acquired an area of 600 square meters in Jrvezh for AMD 450 thousand for residential construction. The other party to the deal was Hrayr Tsugunyan. Nothing is mentioned in Roza Karapetyan’s declaration submitted to the Corruption Prevention Commission about this summer house. Submitting a false declaration by an official has been criminalized since 2017. Arshak Karapetyan, in his turn, has a plot of land in Jrvezh with a half-built garden house on it. The general acquired it in 1999.

In addition, Rosa Karapetyan owns land plots at 239 and 241 Yerevanyan Street in Nor Geghi Community, Kotayk Province. There was a gas station at one of these addresses, which was operated by “Nikagaz” LLC. Rosa Karapetyan was the 33.4% shareholder of the company. The activity of Nikagaz has been suspended since 2012.

According to the declaration submitted to the Corruption Prevention Commission, as of 2020, the only real estate owned by Arshak Karapetyan is the garden house in Jrvezh. His cash amounted to USD 7200 and AMD 800 thousand, his salary as an adviser to the prime minister was AMD 10.7 million, and he received a pension of AMD 4.4 million, from the “sociological security service”, as he put it. Roza Karapetyan did not declare the Jrvezh land plot. Instead she declared the private house on Sevkaretsi Saqo Street, the area she co-owns on Baghramyan Avenue and the Nor Geghi lands. She also has an Audi car, which she bought in 2011. Rosa Karapetyan’s cash amounted to AMD 4.5 million, her salary from “Elcomp” – AMD 912,000, and her income from rent – AMD 576 thousand.

Arshak Karapetyan is a key witness in the March 1 case. He testified against Robert Kocharyan about those days and the well-known consultation, presenting the circumstances under which the army was involved in domestic political processes. Karapetyan was invited to the parliamentary inquiry commission investigating the circumstances of the 2016 April War and gave clarifications to the MPs. In 2015, a year before the April War, Arshak Karapetyan, then Head of Intelligence Department of the Armed Forces, assured on Public TV that “the borders are equipped, the army is ready”, and when talking about the replenishment of Azerbaijani armament, he said ” it had no effect other than loud noise”.

Selective approach and conflict of interest:  following the response of the CPB to the letter of the Human Rights Defender

The Council of Public Broadcaster (CPB) recently issued a statement in response to a letter from the Human Rights Defender...

On October 18, the Human Rights Defender of Armenia stated that the Azerbaijani forces stationed in Gegharkunik Province since May...

Selective approach and conflict of interest:  following the response of the CPB to the letter of the Human Rights Defender

The Council of Public Broadcaster (CPB) recently issued a statement in response to a letter from the Human Rights Defender...

On October 18, the Human Rights Defender of Armenia stated that the Azerbaijani forces stationed in Gegharkunik Province since May...