Judge of the Civil Court of Appeal Gagik Khandanyan last year, without actually having the appropriate funds, acquired a 100% share of “Mush” company for USD 2.3 million. Khandanyan’s entrepreneurial activity, property and in-laws are quite remarkable.

Gagik Khandanyan handed over his share to trust management, but in the opinion of the Commission for Prevention of Corruption, the judge violated the requirements of incompatibility of the judge’s activity defined by the Law on Public Service and the Judicial Code, as according to them, the judge is prohibited from doing business.

Based on the conclusion of the commission, the case on initiating disciplinary proceedings against Gagik Khandanyan is being examined by the Supreme Judicial Council.

The Fact Investigation platform decided to find out who Gagik Khandanyan is, what connections and property he has. 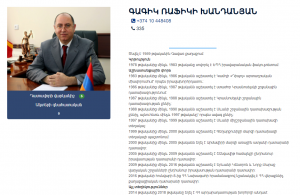 Gagik Khandanyan has held various positions in law enforcement and judiciary bodies since the 1990s. From 2009 he was a judge of general jurisdiction of Kentron-Nork-Marash administrative districts. In January 2006 he was appointed a judge of the Civil Court of Appeal. It is noteworthy that Khandanyan’s son, who is also a judge, is the son-in-law of former Minister of Transport and Communication Gagik Beglaryan.

Gagik Khandanyan acquired 100% share of “Mush” LLC in on May 4, 2020, for USD 2.3 million, but according to the contract, the latter had to pay that amount within a year. In other words, Khandanyan acquired this company under deferred payment. On May 12, Khandanyan handed over his share to the same trust management company “Mush” LLC, represented by director Hmayak Stepanyan.

“Mush” company was one of the largest enterprises engaged in the production of meat products in Armenia, which appeared in the list of 1,000 largest taxpayers in Armenia with taxes of AMD 143.3 million paid in 2017. However, the deterioration of the company’s financial situation in recent years has led to its closure. Even from the mandatory payments made to the insurance foundation for servicemen, we see that the company has only 1-2 employees this year instead of 160-170 employees.

The Commission for Prevention of Corruption stated in its conclusion that Judge Gagik Khandanyan acquired Mush LLC during his tenure, in fact, he had a direct influence on the activities of the organization before handing it over to trust management. In particular, as the only participant of the company, he made a number of decisions, which, in fact, were functions attributed to the management of that company. In addition, even in the case of handed over the share to trust management, the commission notes that Khandanyan’s influence on the company’s activities has not been neutralized, as according to the trust management agreement signed between the latter and “Mush” LLC on May 12, 2020, Khandanyan transferred his share to the management of the same “Mush” LLC, represented by the director of the company Hmayak Stepanyan, who was appointed by Khandanyan. In fact, the possible influence on the company’s activities has been preserved, and there is a reasonable doubt that Khandanyan can provide a favorable position for this company with his decisions.

Based on all this, the Commission for the Prevention of Corruption concluded that Khandanyan had violated the rules established by the Law on Public Service and the Judicial Code.

The property of the Khandanyans

As mentioned, Khandanyan was involved in a large deal, while his financial resources were tens of times less than that amount.

The Khandanyan family members, since 2011, have submitted annual declarations of property and income, as a result of which remarkable and suspicious circumstances have arisen. Gagik Khandanyan and his family members mentioned in their first declarations that they had received quite large donations.

Donors, however, are unknown.

For example, in 2011 Gagik Khandanyan received a donation of 3.8 million drams. The wife, Hripsime Gyamjyan, received AMD 2․4 million , the eldest son, Rafik Khandanyan, AMD 2․5 million , and the daughter, Ashkhen Khandanyan AMD 1.3 million . Khandanyan’s other son, Vahagn Khandanyan, did not declare anything, although the law requires persons living with an official to submit a declaration.

That is, in 2011 alone, AMD 10 million were donated to the Khandanyan family.

In next year’s declaration, Gagik Khandanyan mentioned that he lived with his wife and daughter, therefore, the two sons did not submit declarations. That year, only the daughter received a donation in the Khandanyan family in the amount of AMD 1 million. By the way, Ashkhen Khandanyan did not submit any other declaration after 2011 until December 2020, when she was appointed to the vacant position of senior lawyer of the Civil Acts Registration Agency of the Ministry of Justice, and she won in the competition announced for that position in July of the same year.

In addition to donations, the Khandanyans declared a total of AMD 43.7 million and USD 58,000 in cash in 2011. And this is in the case when the total amount of their annual salaries was AMD 9.4 million.

As mentioned, it is not known who donates large sums of money to the Khandanyans or from where the judge and his wife have such large sums of money, as, in fact, Khandanyan has worked in the law enforcement and judicial system all his life, and the Public Service Law does not allow judges to do business. As for his wife, he works at the Agrarian University.

In 2013, Gagik Khandanyan again receives a large donation. In his annual declaration, in addition to AMD 19.5 million and USD 35,000 in cash and AMD 8.7 million salary, the latter also declared a donation of AMD 1.2 million.

Khandanyan continued to receive donations in 2015. That year he received a gift of an apartment worth AMD 40 million and a garage worth AMD 5 million

In the following years, the change in the property declared by Gagik Khandanyan and his wife was the continuous increase in cash. However, in 2016, Gagik Khandanyan also declared securities worth AMD 5,000 and AMD 25,000 acquired in the two companies that year.

From 2019, the procedure for declaring the property and income of officials was changed. One of the main differences is that if before the officials declared their property in the declaration of assumption of the position, and each year presented only the transactions made in the reporting year, by the new procedure they are obliged to present each year the transactions made during the year and the complete information on the property they own.

In the previous year of 2020, Gagik Khandanyan, in addition to the real estate declared in 2019, also mentioned the 2 undeclared apartments in the city center, which have belonged to him by the right of joint ownership since 2005.

In addition to AMD 71 million and USD 46,500 mentioned in the previous declarations, Khandanyan mentioned a salary of AMD 12.5 million, a loan of AMD 21.5 million as income, as well as other incomes of AMD 1․1 million from the State Revenue Committee, AMD 3․7 million and EUR 1,700 from ACBA bank. Again, it is unknown what other incomes these are, where they came from.

Last year, Hripsime Gyamjyan declared two jointly owned apartments in the city center, a balance of AMD 2.8 million in a bank account, AMD 29 million, USD 27,000 in cash, as well as a salary of AMD 1.3 million from the Agrarian University.

Let us add that the property of Gagik Khandanyan’s son, Judge Rafik Khandanyan and his wife, and the business activities actually carried out are quite remarkable. As mentioned, Rafik Khandanyan is the son-in-law of the former mayor of Yerevan, former Minister of Transport and Communication Gagik Beglaryan. We decided to address their activities and property in a separate investigation.

Business in parallel with the court

As mentioned, last year Gagik Khandanyan acquired “Mush” LLC, which, in the opinion of the Commission for Prevention of Corruption, is a violation of the Law on Public Service and the Judicial Code. However, it turns out that the purchase of “Mush” LLC is not the only one in Khandanyan’s case.

Gagik Khandanyan was appointed a judge of the Civil Court of Appeal on January 8, 2016. Days after his appointment, on January 26, Khandanyan co-founded “Basalt Group” LLC with “Will Way,” an offshore company registered in the Virgin Islands. The company was engaged in the extraction of decorative and construction stones. At present the activity of the company is now temporarily suspended.

In October of the same year, Gagik Khandanyan, together with Iranian citizen Keivan Farahbakhsh Eibal and well-known businesswoman Silva Hambardzumyan, founded “SG & AK Holding” LLC, where he had a 25% share. 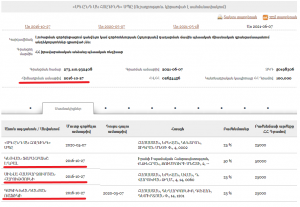 In fact, Gagik Khandanyan, being a judge, started doing business in 2016, stating in his 2019 declaration that he had handed over the shares of those companies to trust management to aforementioned Hmayak Stepanyan. It is noteworthy that Khandanyan left the list of shareholders of “Basalt Group” and “SG & AK Holding” companies three days after the acquisition of “Mush” LLC on May 7, 2020. In both cases, Khandanyan’s share was transferred to the same companies.

The fate of “Mush” LLC

As Khandanyan acquired Mush LLC on the condition of paying $ 2.3 million for it within a year, the Fact Investigation Platform asked Mkhitar Sargsyan, the former co-owner of the company, whether Khandanyan had paid the amount stipulated in the contract or not. According to Sargsyan, the deal was concluded because Khandanyan had promised to attract the necessary financial resources from the bank by pledging the company’s property and own land, thus paying off the debt, but the transaction with the bank failed after which the sale deal of “Mush” LLC did not take place and it was returned to the previous owners.

Gagik Khandanyan also confirmed the information about the unfinished deal in a conversation with FIP.am. “It was returned a long time ago, no payment was made. It was returned in February (ed. 2021), if I am not mistaken,” Khandanyan said. The latter refused to provide other details, to answer other questions about his activities.

According to the state register of legal entities, Khandanyan sold “Mush” company in March of this year.

Thus, let us state that Gagik Khandanyan, being a judge of the Civil Court of Appeal, bought a commercial company and participated in the establishment of several other companies. The Commission for Prevention of Corruption initiated a case only in connection with Khandanyan’s activity in “Mush” LLC, but in fact, the judge applied the same mechanism in the case of the other two companies. It should be noted that although Khandanyan returned the shares of “Mush” LLC, this is not a reason to suspend the disciplinary proceedings against him, as the proceedings have already been initiated on the basis of the transaction, which, in the opinion of the Commission for Prevention of Corruption, is incompatible with the Public Service Law and the provisions of the Judicial Code.

Gagik Harutyunyan grants himself an exclusive power. Judges are in a difficult situation

On July 7, the Supreme Judicial Council issued a decree (SJC-23-N-47) to establish the procedure for changing the seats of...

Gagik Harutyunyan grants himself an exclusive power. Judges are in a difficult situation

On July 7, the Supreme Judicial Council issued a decree (SJC-23-N-47) to establish the procedure for changing the seats of...