The National Security Service informed on October 2 that Deputy Chief of the General Staff Stepan Galstyan has been arrested in the framework of the criminal case investigating abuse and large-scale embezzlement in the process of ammunition supplies.

The Fact Investigation Platform decided to study the property and income declarations of Stepan Galstyan and his family members.

Stepan Galstyan has been working in the Armed Forces since 1992. The Deputy Chief of General Staff previously held the positions of Chief of Aviation of the Ministry of Defense, aviation detachment, military unit, then commander of the base. He was appointed Deputy Chief of the General Staff in January 2009.

Galstyan has submitted property and income declarations since 2014. The funds and income declared by Stepan Galstyan from 2014 to 2019 are quite modest, there is no information on real estate and movable assets. From 2014 to 2017, Galstyan’s incomes did not change in the annual declarations, amounting to AMD 6 million 427 thousand received from the salaries. In 2017 and 2018, his income increased, amounting to AMD 9 million 385 thousand, which was also formed from salaries.

From 2019, the procedure for declaring property and income of officials was changed. According to the new procedure, each year they are obliged to submit both the transactions made during the year and the complete information on the property they own.

Thus, after this change, a large number of real estate appeared in the declaration of the Deputy Head of the General Staff, which he had not mentioned before. We learn from the 2019 annual declaration that Galstyan acquired 8 plots of land in Maralik community of Shirak Province in 2008. It is noteworthy that all 8 plots were purchased on the same day, November 17. In addition to the land plots, Galstyan acquired an unauthorized structure in Maralik in 2005. Galstyan also has two plots of land in the village of Jrvezh in the Kotayk region, one of which he acquired in 1998 and the other in 2007.

In 2019, Stepan Galstyan’s funds amounted to 670 AMD thousand, while there is no data on his income.

In the annual declaration of 2020, the 8 land plots in Maralik became 7, and instead the head of the General Staff bought an apartment in the Arabkir community of Yerevan.

It should be noted that back in 2012, the Hetq.am website wrote that Stepan Galstyan has his own airline. In 2012, a plane crashed near the Maya-Maya Аirport in Brazzaville, the capital of Congo. Seven crew members were killed, five of whom were Armenians. It turned out that the plane belonged to the Armenian company “Ridge Airways”. Sergey Kocharov is mentioned on the website of the State Register as the owner of the company. However, according to the pilot who wrote a letter to Hetq, the plane belonged to the Deputy Chief of General Staff, Lieutenant General Stepan Galstyan, but was registered in the name of his wife, Natalya. Moreover, the plane had been operated illegally for months without having a relevant permit.

Property and income of his wife Natalya Galstyan

The property of Natalya Galstyan, the wife of the Deputy Chief of General Staff, is more impressive. Both Stepan Galstyan and his wife’s incomes from 2014 to 2017 are the same – AMD 1 million 24 thousand, which was received as a salary. In 2017, Galstyan also acquired a plot of land worth 3 million. In 2018, Galstyan’s income decreased to AMD 766 thousand, again formed from his salary. After the change of regulations in 2019, Natalya Galstyan’s property has also changed significantly. The woman, who receives an annual salary of AMD 1 million 24 thousand, is the owner of 16 plots of land, 3 private houses and 1 real estate attached to 1 plot of land. Eleven of Natalya Galstyan’s lands are located in Zaritap village of Vayots Dzor, three in Maralik town of Shirak region, and two in Gomk village of Vayots Dzor Province. The real estate attached to the land is located in Maralik. Stepan Galstyan’s wife has two private houses in Maralik, one in Khachpar village of Ararat Province. We learn from the 2019 declaration that in 2016 Mrs. Galstyan bought a Mercedes-Benz car of the same year, which was not in the annual declaration submitted by her woman in 2016. Her funds at the beginning of the year made AMD 500 thousand, which at the end of the year increased making AMD 800 thousand. She also had AMD 400 thousand in cash. It should be noted that in 2019 Natalya Galstyan’s income amounted to AMD 77 thousand, which she received from her “Natenergo 68” LLC.

Despite the modest declared income, Natalya Galstyan is involved in business activity. She holds managerial positions, and has shares in a number of companies. Thus, Natalya Galstyan is the owner of “NATENERGO 68” LLC, which operates the Gomk small hydropower plant (SHPP). The SHPP is located in Vayots Dzor Province, in the administrative area of Gomk village of Zaritap community. It is built on the Kapuyt tributary of the Arpa River. 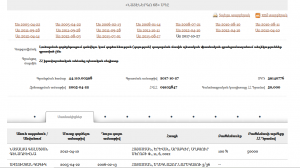 The wife of the former head of the Aviation Department of the Ministry of Defense has been holding the position of the director since the day of the foundation of “RIDGE AIRWAYS” LLC in 2011. It should be reminded that it was the plane of this company that crashed in Congo in 2012. 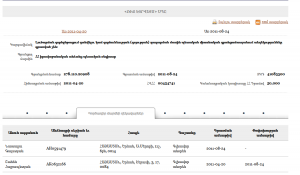 Stepan Galstyan’s wife was director and shareholder in “ENERGY KOK” LLC for about a year (2011-2012). It should be noted that “ENERGY KOK” LLC operates Khachaghbyur SHPP located in Getahovit village of Tavush Province.

The wife of the Deputy Chief of General Staff has a 50% share in “GM GROUP” LLC, founded in 2014. Galstyan also holds the position of director in the company. GM GROUP has paid only AMD 1000 a month to the Insurance Fund for Servicemen since its foundation, meaning that it has had only one employee.

In fact, Stepan Galstyan and his wife own impressive property. The business activity of Natalya Galstyan is of special interest, especially in the light of the circumstance that it is not reflected in her declarations.

Has the time of the local “princes” passed? Pashinyan’s statement and the new acting mayor of Jermuk

After the 44-day war, many monuments of historical and cultural value appeared under the control of Azerbaijan. Many of them...

What investments did the All-Armenian Fund make in the occupied territories of Artsakh?

As a result of the 44-day war in Artsakh, many infrastructures remained in the territories under the control of Azerbaijan....

Has the time of the local “princes” passed? Pashinyan’s statement and the new acting mayor of Jermuk

After the 44-day war, many monuments of historical and cultural value appeared under the control of Azerbaijan. Many of them...

What investments did the All-Armenian Fund make in the occupied territories of Artsakh?

As a result of the 44-day war in Artsakh, many infrastructures remained in the territories under the control of Azerbaijan....