In a lengthy message on February 21, Russian President Vladimir Putin, referring to the activities of the Ukrainian authorities after independence from the USSR, accused them of Nazism and anti-Russian sentiment. Putin particularly referred to the Ukrainian legislation, claiming that it has many manifestations of ethnic discrimination against Russian citizens living in that country.

In a message issued on February 24, which declared a de facto war with Ukraine, Putin mentioned the need for “de-nazification” and “demilitarization” among the goals of hostilities in that country.

Fact Investigation Platform examined the allegations of the Russian President, trying to find out their compliance with the descriptions of racial discrimination and genocide in international conventions, as well as compared the relevant Ukrainian legislation in the mentioned field.

Nazism according to Putin and international conventions

In his February 21 message, in which he also gave a historical overview of the formation and then independence of the USSR republics, in particular Ukraine, Putin accused the post-Soviet peoples, especially the Ukrainians, of nationalism, emphasizing that the collapse of the USSR was “on the conscience” of the elites of the Soviet republics.

“From the very beginning, I want to emphasize that the Ukrainian authorities, from the very first steps, began to build their statehood around everything that unites us (Russians, Russia- ed.). “It is absolutely not surprising that Ukrainian society has faced extreme nationalism, which has quickly turned into aggressive anti-Russian sentiment and neo-Nazism,” Putin said.

“Fact Investigation Platform examined the 1965 UN Convention on the Elimination of All Forms of Racial Discrimination, the first article of which defines the concept of racial discrimination. According to it, racial discrimination “means any distinction, exclusion, restriction or preference based on race, colour, descent, or national or ethnic origin which has the purpose or effect of nullifying or impairing the recognition, enjoyment or exercise, on an equal footing, of human rights and fundamental freedoms in the political, economic, social, cultural or any other field of public life.”

The Russian president accused the Kyiv’s authorities of pursuing a policy of “de-Russification,” i.e. assimilation of Russian citizens living there.

“People who consider themselves Russian, want to preserve their identity – language, culture – immediately felt that they are unwanted in Ukraine,” Putin said, adding that the law on the state language of Ukraine removed Russian from schools, from public domain.

FIP.am studied the law on Ukrainian as a state language adopted by the Verkhovna Rada of Ukraine in 2019. Article 21 states that the right of Ukraine’s national minorities to study in their own language in community education institutions along with the state language must be ensured.

“This right must be exercised in accordance with the law by establishing separate classes/groups, ensuring the teaching of the language of the national minority,” the law states.

In fact, Putin’s assertion that Russians in Ukraine are legally deprived of studying their native language is untrue.

At the same time, it should be noted that Articles 25 and 26 of the same law require media outlets and publishers to broadcast / publish mainly in Ukrainian, with a number of restrictions on other languages. Moreover, the law provides an exception only for Crimean Tatar, as well as for the languages ​​of other indigenous peoples of Ukraine. Exceptions are even made for English and some official EU languages, but not Russian.

It is noteworthy that a number of international organizations and human rights organizations have made disturbing observations on the law. For example, the Venice Commission, an advisory body to the Council of Europe, noted that the law did not maintain an equitable balance between the language of minorities, in particular Russian and the official language, Ukrainian.

The relevant document of the commission states that the Ukrainian authorities justified these restrictions on the Russian language with “hundreds of years of pressure on the Ukrainian language,” as a result of which Russian gained dominance over their language.

The law was also referred to by the well-known international human rights organization Human Rights Watch, expressing concern over the protection of minority languages. The HRW report emphasizes that the Russian language issue in Ukraine is “extremely politicized.”

“The Ukrainian government has every right to promote the state language and strengthen its national identity, but the country must balance its language policy to avoid discrimination against national minorities,” the human rights organization noted.

It should be noted that Article 5 of the Convention on the Elimination of All Forms of Racial Discrimination clearly lists all forms of racial discrimination which the participating states undertake to prohibit and eliminate, while ensuring the equal exercise of a number of essential rights. These include cultural rights.

Putin is manipulating the law on Indigenous peoples

In his speech, Putin also referred to the law “On Indigenous Nations” authored by President of Ukraine Volodymyr Zelensky in July 2021 and adopted by the Verkhovna Rada.

“The Verkhovna Rada is constantly passing new discriminatory bills, the so-called law of indigenous peoples is already in force,” Putin said, calling it “another manifestation of anti-Russian sentiment.”

FIP.am found out that according to this law, the Russians are truly not included in the list of the indigenous peoples of Ukraine, unlike, for example, the Crimean Tatars, other peoples of the peninsula – Karaites, Krymchaks , etc. However, it should be noted that the first article of the law defines as indigenous only those peoples who do not have a state outside Ukraine.

Along with the Russians, this list also does not include peoples living in Ukraine for hundreds of years, such as Poles, Jews, Armenians, and so on. Their rights as a national minority are ensured by the relevant articles of the Constitution of Ukraine

Therefore, Putin’s claim that the law is against the rights of Russians in Ukraine is manipulative.

“They are committing genocide against their Russian citizens”

In his message, the Russian president also accused the Kyiv’s authorities of committing genocide against the Russians in Ukraine.

“The so-called civilized world, the only pioneers of which the self-proclaimed representatives of the West have declared themselves, prefers to ignore all that, all that nightmare, genocide, to which almost 4 million people are exposed, just because they were not compliant with a coup backed by the West in Ukraine in 2014,” Putin said.

The International Convention for the Prevention and Punishment of the Crime of Genocide defines “genocide” as acts committed with the intent to exterminate, in whole or in part, any national, ethnic, racial or religious group, in particular the killing of a member of that group, causing serious bodily or mental harm, deliberately inflicting on the group conditions of life calculated to bring about its physical destruction in whole or in part,  imposing measures intended to prevent births within the group, forcibly transferring children of the group to another group.”

Fact Investigation Platform examined the OSCE Office for Democratic Institutions and Human Rights Annual Report on Hate Crimes․ Accordingly, the number of crimes committed on the grounds of national / religious hatred in Ukraine in 2016-2020 amounted to about 900. According to the report, these crimes targeted Jews, Gypsies, Muslims, Christians, and other religious and national / racial groups in which Russians are not specified.

According to a similar report by the same body, the total number of such crimes in the Russian Federation in 2016-2020 was more than 3400. 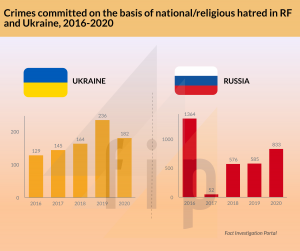 The report of the international organization shows that crimes committed on the grounds of national / religious hatred are individual cases in Ukraine, which are not of a mass, systemic nature to be considered a genocide crime defined by international law. Therefore, Putin’s allegation that some groups in Ukraine, particularly the Russians, are being subjected to genocide by the Kyiv’s authorities is far from being true.

False Statement by Putin: At Least the Former Authorities of RA Agreed to Return the Adjacent Regions of Nagorno-Karabakh

On October 27, during the annual meeting of the "Valdai" international discussion club, the President of the Russian Federation, Vladimir...

False Statement by Putin: At Least the Former Authorities of RA Agreed to Return the Adjacent Regions of Nagorno-Karabakh

On October 27, during the annual meeting of the "Valdai" international discussion club, the President of the Russian Federation, Vladimir...