Chronicle of the June 3 Clash: How it Started and what the Reaction the Violence Received (videos)

The Resistance movement has been trying to achieve the resignation of the incumbent Prime Minister through a street struggle for more than 40 days. Almost every day, the participants of the movement carry out acts of disobedience, marches in the streets of Yerevan, and final rallies in the evening in France Square, which has been closed for traffic since May 1.

During one of the marches, on June 3, when the march reached the government residences and tried to move towards the National Assembly, clashes broke out between the demonstrators and the police after which, according to the latest information, 60 people were hospitalized, 39 of them police officers, 21 – participants of the act of disobedience.

During the clashes, the police used flash grenades the use of which one of the police officers explained by the fact that the participants of the act hit the police with stones.

Fact Investigation Platform studied the clashes that took place on June 3 through live broadcasts on the Internet and videos in the media and singled out the episodes of the use of force from both sides.

What did the clashes start from? 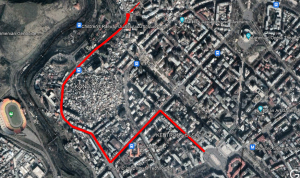 The march moved along the trail pictured in the photo and stopped at the Proshyan-Demirchyan crossroads. The police forces were concentrated there and closed the entrance to Demirchyan Street.

After a short pause and speeches, Ishkhan Saghatelyan announced marching to the National Assembly. «․․․ During this time, several deputies have hidden in the Parliament and publish some photos, and they say, “We have not run away, we are here.” Well, in that case wait in the Parliament, we are coming to the parliament now,” said Saghatelyan, after which he called on the police to open the street so that the march could go to the Parliament through Demirchyan Street. “Let the women, girls stand aside, this street must be opened right now, there is no closed street in front of us. We are going to open the street, we are going to the Parliament this way,” Saghatelyan announced.

After this call, the participants of the march approached the police wall and tried to open the street by pushing to go on the route they had planned. The police did not open the street, a scuffle started, which turned into a two-way fight.

Details of the clash

A study of live broadcasts by Para TV, Yerevan Today and 24news shows that during the scuffle, the demonstrators threw the objects in their hands at the police. It should be noted that the actions described before the 11th video took place before the police used special means.

At 4 hours 35:40 of Para TV live broadcast, a citizen participating in the act throws a bottle at the police.

In these shot of the live broadcast of Para TV, a citizen is seen picking up an object and throwing it at the police. At the same time you can see objects thrown in different directions.

For example, in this shot, the police threw a shoe at the demonstrators, which hit one of the citizens on the head, as a result of which the latter’s hat fell to the ground. After this shot you can see how some objects are thrown in both directions.

The three shots of the next video [1,2,3] show citizens throwing bottles at police.

In this video, an object thrown by one of the citizens touches the face of a police officer.

As a result of observing the live broadcasts from the scene of the clash, we have also singled out several shots where police officers beat or hit citizens who were carrying out an act of disobedience.

In this video, several police officers beat one of the citizens.

In another video, a police officer hits one of the citizens in the head with a rubber truncheon, after which the citizen leaves the police wall holding his head.

In this video, a police officer hits the back of a detained citizen.

The day after the clashes, the Hayastan bloc published a footage with police violence.

Lawyer Amram Makinyan also published footage of the use of force by the police. A few days later, a former MP Naira Zohrabyan published another video. It shows an unconscious citizen who, according to Zohrabyan, fainted after a clash with the police officers.

About the use of special means

During these clashes, the police used special means – ASZ-40 flash grenades and rubber truncheons. Although the grenades were supposed to explode in the air at a safe distance from the citizens, one of the citizens claims that it exploded at a very close distance, from which he was injured.

According to the available videos, one of the grenades exploded at a very low height, near the traffic light, where both police forces and demonstrators were gathered. This shot was recorded by the media from another angle.

The other grenades exploded higher, the moment of the explosion of the two was fixed.

The use of special measures is regulated by the Law on Police. Article 31 of the law stipulates that the police have the right to use flash means if they prevent the attack on citizens, police officers, if they do not comply with their lawful demand, when there are sufficient grounds to assume that the person or persons are preparing armed resistance, if they release persons who have been abducted, illegally deprived of their liberty, forcibly detained or seized buildings, premises and vehicles,

and if they are preventing riots and group actions disrupting the work of transport, communication and other organizations.

The procedure of application of special measures, the permissible criteria of application are defined by the order of the Minister of Health. According to the established procedure, during the use of ASZ-40 at a distance of 10 meters the sound pressure level should be no more than 120 decibels, and the minimum operating distance – 100 meters.

For this type of flash grenade, it is not specified what the minimum distance of the explosion should be from people, but according to the criteria, the minimum safe operation distance of other flash grenades included in the police armament (Zarya, Zarya-2, Fakel, Fakel-S, Plamya, Plamya-M, Plamya-M2) from a person is set at 2.5 meters.

Another order of the Chief of Police defines the procedure for the use of special means by the police troops and their distribution to the servicemen of the police forces. According to this order, the AZS-40 flash grenade does not cause fragment wound.

As for the use of rubber truncheons, according to the criteria set by the Ministry of Health, it is not allowed to hit people on the head, neck, abdomen, genitals, parts of internal organs, as well as the elderly, pregnant women and the disabled. However, in one of the videos posted above, it is clear how the police officer hits the citizen with a truncheon in the head. The order of the Chief of Police states that when using rubber truncheons hitting the head and neck should be avoided.

Police about the incident

As for throwing bottles, it was obvious even from the parts of live videos. It is not possible to understand from the videos whether stones or other metal objects were thrown at the police or not.

A few days later, the police released a video showing footage of citizens throwing objects at the police. In one part of the video, one of the citizens hits the back of the police officer with a long hammer-like object.

The police note that during the inspection of the scene, stones, metal and wooden rods, glass and plastic bottles, torn pieces of police uniform, torn shoulder straps, other items and objects were found. Only plastic bottles and stones are seen in the footage shown in parallel with this words.

Besides, although the police only mentions finding torn pieces of police uniform, only watching the live broadcast at the scene it is possible to see torn pieces of civilian clothes, shoes, etc. 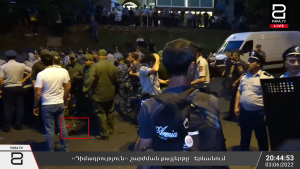 The results of the ombudperson’s monitoring

The report of the Human Rights Defender records the fact of clashes and the use of special means by the police. In addition, it was noted that in private conversations with citizens, citizens reported that in a number of cases their bodily injuries had already been inflicted by the police officers under their actual detention, i.e. not during the clashes at the scene, but after they were detained.

The Defender’s Office also recorded cases of bodily injuries inflicted on police officers of various degrees, including by cutting and piercing tools and heavy metal objects.

It is noteworthy that just on the following day, the Resistance movement marched on Derenik Demirchyan Street, which had been closed by the police the previous day.

Following the “Persecution” of a Russian Stand-up Comedian: what is Known about Shchukina and her “Case”?

Russian stand-up actress Tatyana Shchukina, who moved to Yerevan, wrote on her Twitter account on June 16 that the Armenian...

MP Ghazinyan is wrong: It is lawful to detain a person for swearing

Today, during the street disobedience actions of the opposition "Resistance" movement, an incident took place between the police and "Hayastan"...

The Civil Contract faction deputy is wrong: the police exercised disproportionate force against the protesters

In an interview with Freenews on May 14, Rustam Bakoyan, a member of the National Assembly, said that the police...

The tragic accident of a pregnant woman: the speculation of the opposition and the manipulative reposnse of the Prime Minister’s staff

In the evening of April 26, a news was spread on Facebook about a woman who was run over by...

Following the “Persecution” of a Russian Stand-up Comedian: what is Known about Shchukina and her “Case”?

Russian stand-up actress Tatyana Shchukina, who moved to Yerevan, wrote on her Twitter account on June 16 that the Armenian...

MP Ghazinyan is wrong: It is lawful to detain a person for swearing

Today, during the street disobedience actions of the opposition "Resistance" movement, an incident took place between the police and "Hayastan"...

The Civil Contract faction deputy is wrong: the police exercised disproportionate force against the protesters

In an interview with Freenews on May 14, Rustam Bakoyan, a member of the National Assembly, said that the police...

The tragic accident of a pregnant woman: the speculation of the opposition and the manipulative reposnse of the Prime Minister’s staff

In the evening of April 26, a news was spread on Facebook about a woman who was run over by...