The term “fake news” received worldwide recognition during the 2016 US presidential elections.  According to an analysis conducted by Canadian journalist Craig Silverman, top 20 news stories published by 19 major media outlets engaged less people on Facebook than the top 20 fake news. At that time all parties were spreading fake news but incomparably greater in number were fake news published by right-wing (conservative) media outlets which supported presidential candidate Donald Trump or discredited his opponent Hillary Clinton.

It is not clear how far the fake news stories affected voters’ decisions. According to a study conducted by the State University of Ohio, voters who voted for Democrat Barack Obama in the 2012 presidential election and who in 2016 turned their back on Democrats (voting for Trump or another candidate, or not participating in the elections at all), were more inclined to believe fake news than others. However, other experts have criticized the study for being incomplete. The authors themselves admit that the study does not prove that fake news have changed the opinion of these people but only shows that they are inclined to believe fake news. American psychologist David Rand believes that especially elderly and undereducated voters tend to believe fake news.

Usually during elections, both in the United States and in Armenia, there are many “dirty” tools that are mostly “innocent”, clickbait stories. However, unfortunately, fake news is not always safe for people’s physical health. There are a number of international examples when fake news moved from the virtual platform to reality, having serious consequences. One such example is the brutal murder of two men in Mexico in August. As the international press wrote, the violent mob beat a 21-year-old young man and his 56-year-old uncle, after which they were burned to death in front of the police station of the town. It was caused by fake news circulating on WhatsApp according to which 2 men are involved in child kidnapping and organ trafficking.

In May 2014, Brazil was in a nationwide shock when a 33-year-old woman was hanged by the mob because of allegedly conducting magical rituals on kidnapped children. The only fault of the woman, who was a mother of two children, was her physical resemblance to another woman charged with kidnapping. And in India at least 5 people were killed in May only because of rumors on WhatsApp. In the same India seven innocent men were killed last May on suspicion of kidnapping. Such rumors have become so dangerous in India that the local police send their officers to the villages to warn people about circulating ungrounded news.

On December 28, 2018, a 28-year-old man opened fire on Comet Restaurant in the US State of North Carolina. This action was prompted by a conspiracy theory according to which Hillary Clinton’s presidential campaign chairman John Podesta’s letters allegedly proved his link to a child-sex-trafficking ring. The restaurant was also attributed to the ring, and the man thought he was saving children from exploitation. The conspiracy theory emerged and spread in the Internet.

As for Armenia, fake news is widely spread on social networks. Some of them contain dangerous or harmful elements. Perhaps it is worth mentioning the “Dukhov Armenia” page on Facebook, which regularly makes provocative publications.

The page uses Nikol Pashinyan’s picture and uses the word “dukhov” that became a slogan during the velvet revolution, creating confusion in people. Below are some of the posts on the page that contain evident provocations and incite violence. 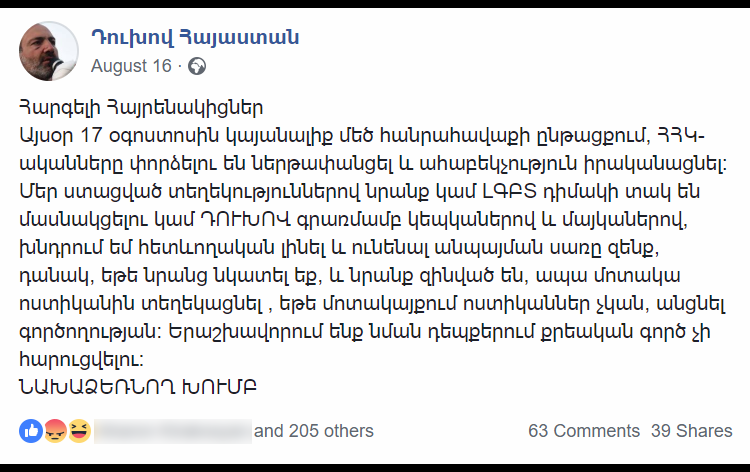 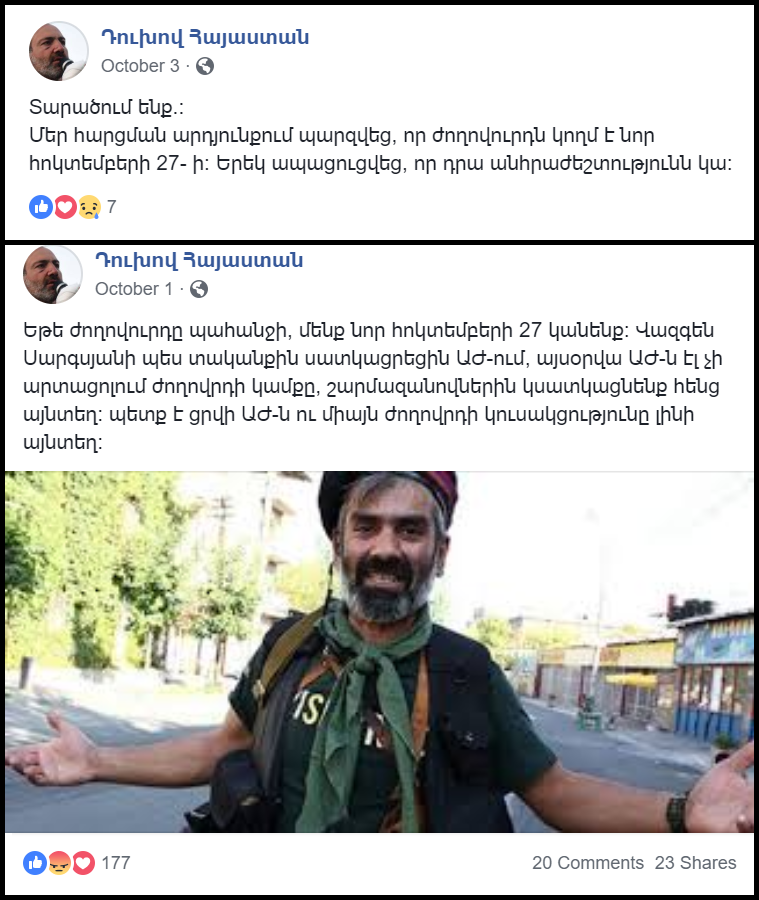 Fortunately, in such cases Armenia succeeded in avoiding tragedy, but only the fact that such publications can be actively disseminated and seem to be credible to some, alarms that there is a serious challenge to raise the level of media literacy in the society.

UNESCO does not recognize Kochari as an Azerbaijani dance

Kocharyan not aware of Decree N 0038? Facts claim the opposite

Occupation, recognition and negotiations: What facts were distorted by Ilham Aliyev in Munich?

During a panel discussion of the Armenian and Azerbaijani leaders on the Nagorno Karabakh conflict in Munich on February 15,...

Tourism in Armenia: The numbers are growing but there is no boom

Deputy Prime Minister Tigran Avinyan said in an interview with RFE/RL on February 3 that there was a significant growth...

On November 5, 2019, referring to the allegations of decline in emigration, former prime minister and economist Hrant Bagratyan claimed...

The opening of the Gavar textile factory remained a mere promise

Kocharyan not aware of Decree N 0038? Facts claim the opposite