Hayk Marutyan was filmed in commercials before becoming mayor

Q: Was Hayk Marutyan filmed in the advertisement after taking office as mayor?

A: No. Hayk Marutyan was filmed on commercials before becoming a mayor.

Recently, commercials on VivaCell MTS’s new tariff plans were run on TV and social networks with the participation of Yerevan Mayor Hayk Marutyan. Thus, the public started to wonder why the mayor continues to be filmed on commercials.

After he was elected mayor, Hayk Marutyan announced that he would stop his professional activities, although the law does not ban engaging in creative work, acting or advertising.

The mayor’s spokesperson Hakob Karapetyan has stated that the commercials are not newly shot. Marutyan also denied having been filmed in new commercials.

Fip.am sent an inquiry to VivaCell MTS to find out when commercials with Hayk Marutyan were shot.

VivaCell MTS announced that ads on “X”, “Y” and “Z” tariff plans were prepared and shot within the framework of the advertising service contracts between “MTS Armenia” CJSC and the two advertising companies concluded on March 13 and April 1, 2018, i.e. in the period when Marutyan was not mayor yet. (Marutyan assumed that office on October 13). 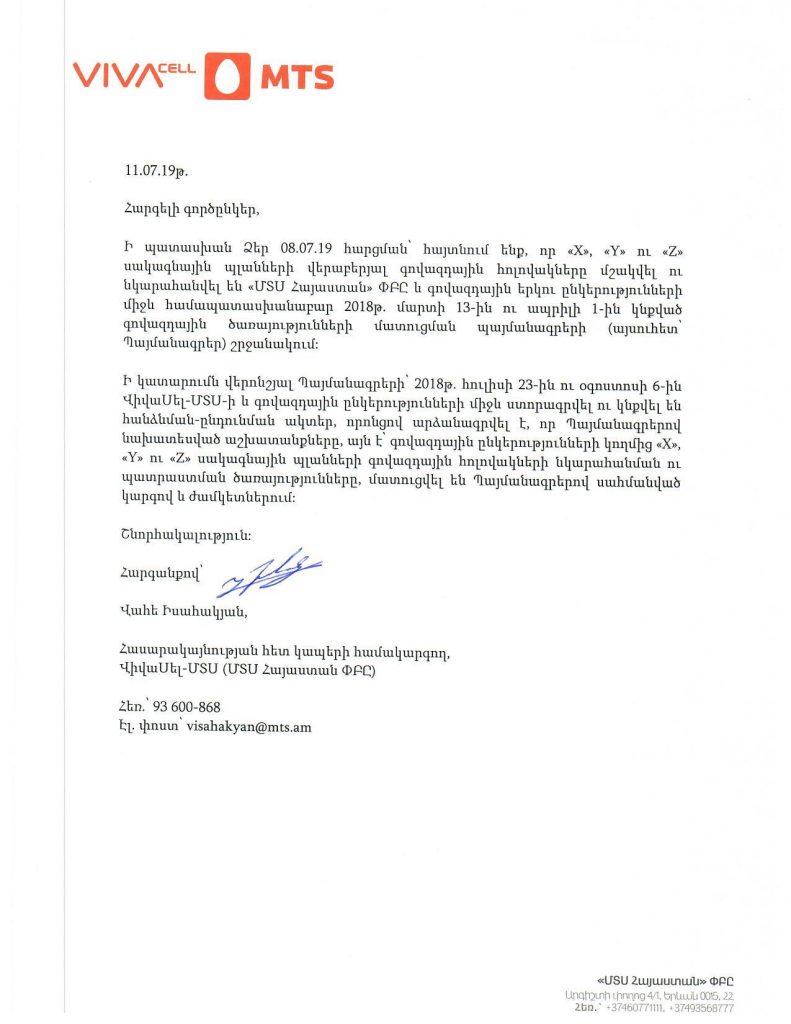 “In fulfillment of the above-mentioned contracts, VivaCell-MTS and the advertising companies signed acts of acceptance on July 23 and August 6, 2018, that stated that the services provided by the contract, namely shooting and preparation of promotional videos for “X”, “Y” and ” Z “tariff plans, were provided in accordance with the terms and conditions defined by contracts” VivaCell MTS responded.

In other words, the videos with Marutyan were filmed in March to August 2018.

Thus, Hayk Marutyan was not filmed in the aforementioned commercials after assuming the mayor’s post, and the videos circulated on TV were shot earlier, before Marutyan became mayor.

The founder of the VETO movement, former adviser to the chief of police Narek Malyan, made a post on his...

Executive Director of the Union of Advanced Technology Enterprises of Armenia (UATE) Karen Vardanyan told Lratvakan.am radio that the Ministry...

The Information Checking Center (infocheck.am) under the Public Relations and Information Center SNCO adjunct to the Prime Minister's Office responded...

Ropeway and Subway: at what stage are the plans announced by Arthur Meschyan?

Chief Architect of Yerevan Artur Meschyan told reporters on May 14, 2019 that the design work for the new metro...