In all her speeches, Larisa Minasyan emphasizes that if there was no Soros office in Armenia, no revolution could have ever taken place: Narek Malyan

On October 16, the founder of the VETO movement Narek Malyan, in an interview with TV host Agnesa Khamoyan, made a number of false statements. Referring to Armenia’s internal political processes, Open Society Foundations (OSF) and a number of other topics, he made statements that were not true.

Speaking about Open Society Foundations (OSF), often coined “Soros’s Foundation” and linked with the Armenian authorities, Narek Malyan stated: “In all of her speeches, Ms. Larisa Minasyan has repeatedly emphasized that if there were no Soros office in Armenia, there would be no revolution.” (9:02-9:16)

In fact, Larisa Minasyan, head of Open Society Foundations, has repeatedly denied rumors that the foundation has assisted or had anything to do with the April-May 2018 revolution in Armenia.

Even last year, Minasyan announced: “The revolution was carried out by the people, and the people were so unequivocally in favor of these changes that any rational person could see it. If some people try to see Soros, they are acting against obvious realities. It is not possible to tell hundreds of thousands of people that they went out to the streets because George Soros has told them to do so. ”

About the report sent to the police against the “VETO” movement

Referring to the report sent to police against VETO Initiative by Open Society Foundations Office, Malyan notes: “The whole Soros office, Agnesa jan, is busy with paperwork trying to prove that the expression “Soros’s offsprings “is a swearing of a sexual nature. I do not want to repeat that blasphemy, but in their report it is mentioned a “swear word”. “Soros’s offsprings are like “offsprings of an immoral,” that’s what is written in their report, “Malyan says.

As a reminder, on September 30, the OSF office filed a complaint to the police on demanding a criminal case initiated against VETO members for writing “Soros’s offsprings” in the nearby area of the foundation and for damaging the property of the foundation.

OSF has provided the Fact Investigation Platform with the report sent to the police, however no allegation was found there that the expression “Soros’s offsprings” is a swearing of sexual nature, as Malyan states. The word “swearing” or “swear word” never comes across in the report. We present the report below. 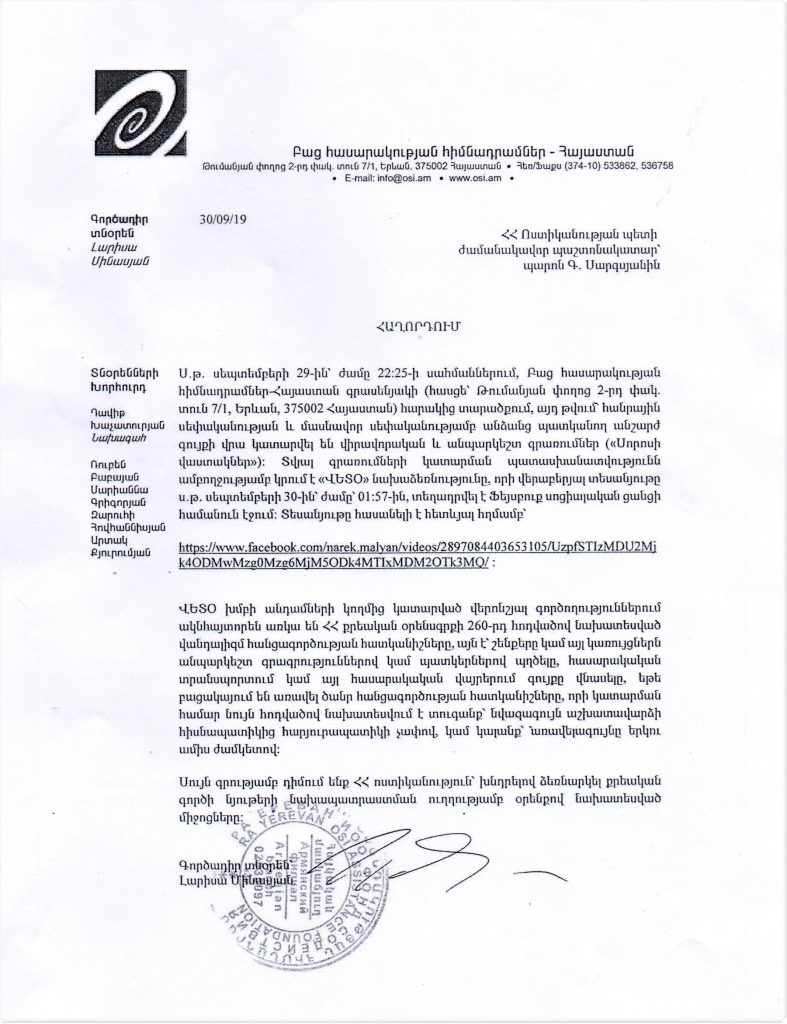 About the voice of violence and anonymous letters

Speaking about the dissemination of letters by Facebook user Lucy Kocharyan from people who had been sexually abused, Malyan said the letters were fake.

“It was confirmed by an official police report. The police refused to open a criminal case on any of the 200 letters of cases of rape on the basis of lack of any actual evidence. This means that all 200 letters were fake,”Malyan said.

In fact, however, the letters published by Lucy Kocharyan were anonymous, and according to Article 177 of the Criminal Procedure Code, anonymous reporting is not a basis for initiating a criminal case.

As a report of crime, the information that has certain specificity is assessed and processed, so that based on the preliminary information it is possible to make a conclusion about the crime committed, the place, the way it was done, the time or the persons who committed it.

Accordingly, it is quite logical that the police could not start a criminal investigation on the basis of anonymous letters. In a statement the police mentioned: “If women are subjected to violence, they need to provide verbal or written information to the police about the circumstances of the crime in order to identify the perpetrators and hold them accountable.”

That is to say, the police did not initiate a criminal case on the grounds that the letters were false, but on the basis of insufficient data.

Establishment of shelters under the Istanbul Convention

Speaking about the ratification of the Istanbul Convention, host Agnesa Khamoyan states that the Convention presupposes the creation of shelters. Malyan responds: “But who will give these shelters? Are these NGOs? Which NGOs? Is it Arthur Sakunts or maybe Daniel Ioannisyan that will decide where to take the child …? ”

In this case, both Agnesa Khamoyan and Narek Malyan turn to manipulation, as shelters in Armenia will not be newly established.

Women’s Support Center NGO has opened two shelters in Armenia since 2006. There is also the shelter of the Armenian Lighthouse Charitable Foundation in Armavir region.

These shelters are designed for people who have been subjected to domestic violence.

In addition, by the 2017 Law  on prevention of domestic violence, protection of persons subjected to domestic violence and restoration of solidarity in family” the RA Government has already been committed to establish shelters. Meanwhile their beneficiaries are not the persons or NGOs mentioned by Narek Malyan, but the state authorized special authority (Article 14, paragraphs 4 and 5).

About an MP getting money from “abroad”

In the interview, Malyan states that Gayane Abrahamyan, a member of the NA faction “My Step”, is currently being paid by the Soros office.

“I mentioned MPs who have been paid and who are still being paid by Soros. I talked about Gayane Abrahamyan, she is paid by Soros’s office. Here’s the question: is this MP being funded from outside? This is ….you know….Do you understand what this all is?” declares Malyan. Then Malyan contradicts his remarks, noting that the deputy received money before the election and is still spending it. (18:28-18:55)

Speaking to the Fact Investigation Platform, Abrahamyan denied the rumors. The MP noted that during the pre-election period of the National Assembly she stopped her activities in the “Article 3” club created by “For Equal Opportunities” NGO and received no salary. Immediately after receiving her deputy mandate, she left the organization and did not receive any funding from the OSF office.

On the occupation of the state and cancellation of international treaties

Referring to the link between the Velvet Revolution and George Soros, Malyan stated: “The goal is to nullify all the state contracts that our country has signed in the last 10 years or more under the name of state occupation. In other words, if the state has been occupied, then, for example, any Armenian-Russian treaty is recognized nullified.” According to Malyan, the “occupation of the state” was used in Georgia, Ukraine, and as a result both countries had territorial losses, and Ukraine suffered about 20,000 casualties because of this thesis.

In fact, there are very few countries that have made a statement about the “occupation of the state”. Such a statement was recognized, for example, in Moldova.

In November 2018 this country was recognized by the European Parliament as a “state captured by oligarchic interests”.

And in June 2019, the Moldovan Parliament adopted a statement describing the country as an “occupied state”.

Since then, the country’s government and the Constitutional Court have resigned in full. And despite that, previously signed international treaties have not been revised or canceled.

As for Georgia and Ukraine, let’s state that the powers that have come to power in these countries have not adopted a statement on the occupation of the state, and another statement of Malyan is again false.

Only on May 31 of this year, former President of Ukraine Petro Poroshenko was charged with the article of seizure of power.

This means that Malian’s statement that the notion of state occupation in Ukraine led to the loss of territories and the deaths of 20,000 people is also false, as the victims of the war in eastern Ukraine and Crimea’s annexation of Russia were before Poroshenko’s indictment.

Thus, the above-mentioned statements made by Narek Malyan on “Channel Number 5” were false and manipulative.

On March 10, the Haylur news program of Channel 5 referred to the cars purchased for the Patrol Service, during...

On March 10, the Haylur news program of Channel 5 referred to the cars purchased for the Patrol Service, during...