In the 40-minute video, Minasyan not only managed to attribute new businesses to Prime Minister Nikol Pashinyan, but also drew parallels between Nikol Pashinyan  and the President of Azerbaijan Ilham Aliyev.

In particular, Minasyan stated that Nikol Pashinyan has turned Armenia into Azerbaijan, and he governs it with the same formula as Ilham Aliyev and Mehriban Aliyeva govern Azerbaijan.

According to Minasyan, no Armenian leader has ever staged a play in the theater based on his book, their statue has not been erected during their lifetime, or no state-sponsored book has been published about them, and this is what is happening in Armenia and Azerbaijan today.

Moreover, Minasyan also stated that the wife of the leader of Armenia has never had the influence Anna Hakobyan has.

In the video message titled “Ordinary Blackmailer Azerbaijanizing Armenia. Return to Reality”, the third president’s son-in-law makes emotional statements, presents the facts with manipulative comments, thus, obviously, aiming to mislead the public, which is why we decided to refer to his statements point by point.

About the book dedicated to Nikol Pashinyan

“A book about a leader of Armenia entitled ‘The Savior from Ijevan’ has never been published with state funds, and this has taken place in Ijevan with municipality funds,” Minasyan said in his video message.

However, Serzh Sargsyan’s son-in-law is very wrong. Moreover, the author of the book about Pashinyan, Lyubik Chibukhchyan, once authored a book about Minasyan’s father-in-law, Serzh Sargsyan. In 2008, under the auspices of the Tavush Regional Administration, Chibukhchyan published a 479-page book “The Biggest Little One” dedicated to Serzh Sargsyan, in which he wrote:

“You are small, Serzh, but like your nation, you are bigger than everyone,

And with a cut navel you grow from your own itch. “ 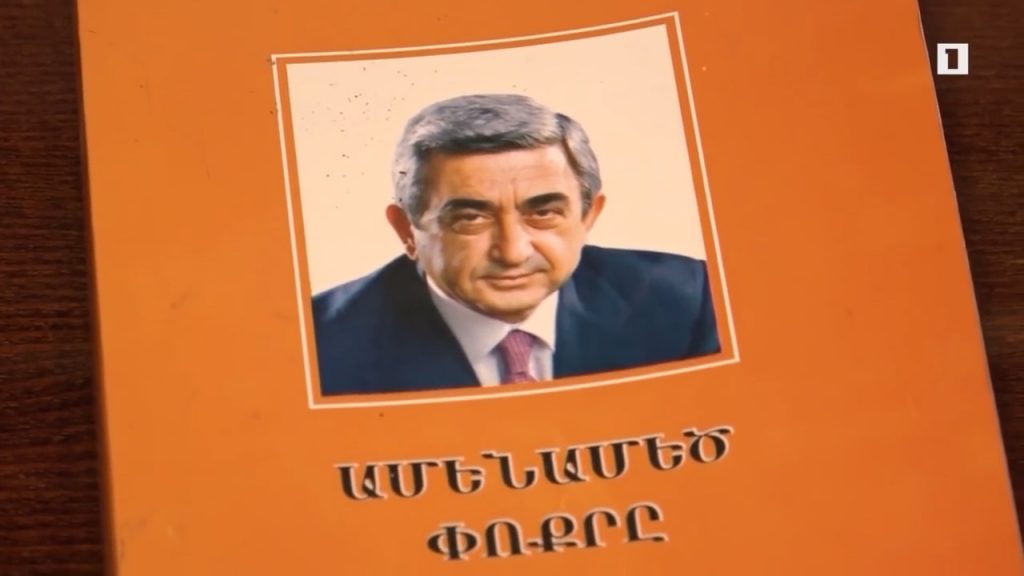 Chibukhchyan has authored more than 260 books (mostly at the expense of the community budget), most of which are about leaders from different countries (Vladimir Putin, Mahmoud Ahmadinejad, etc.). If Mikael Minasyan sees issues in publishing books about leaders with state funds, it is surprising why he did not say anything about the book dedicated to his father-in-law.

After the 2018 Velvet Revolution, a sculpture of Prime Minister Nikol Pashinyan called “My Step” was placed on the Vanadzor-Gyumri highway in autumn. The author of the sculpture was Armen Davtyan from Ijevan, who had installed the statue on his own initiative. His son explained that it was not a statue to honor a man, but it summed up the main idea and achievement of the revolution. It should be noted here that the statue was not an initiative of the state or community, it was not installed at the expense of state funds, but it was entirely the idea of the sculptor. Moreover, the statue was damaged and broken several times.

As for the parallels drawn by Minasyan between the “My Step” statue and “Statues of Heydar Aliyev”, they are manipulative.

For almost three decades, Heydar Aliyev has been turned into a national symbol at the state level in Azerbaijan. There are streets named after him in every city. Moreover, according to official data, there are 60 Aliyev museums in the country. The huge statue of Heydar Aliyev in Minasyan’s video is in the center of Baku. It was erected in 2005 at the expense of state funds. One of the co-authors of the sculpture is Ilham Aliyev’s wife, Mehriban Aliyeva.

In fact, the comparison made by Minasyan is manipulative, as the decision to erect a huge statue of Heydar Aliyev was made at the state level, at the expense of Azerbaijani taxpayers. And the “My Step” statue on the Vanadzor-Gyumri highway was the idea of a sculptor from Ijevan, who was not supported at the state level, and, according to the authors, it has nothing to do with the cult of the individual. As for the cult of the individual, it is worth remembering Serzh Sargsyan’s pictures in all Armenian schools and other state institutions, which were bought at the expense of state funds.

About the staging of Nikol Pashinyan’s book

“No Armenian leader has ever staged a play in the theater based on his book during his lifetime, something that is happening in Azerbaijan,” Minasyan said.

As for Minasyan’s claim that such a thing has happened in Azerbaijan, it should be noted that neither Heydar Aliyev nor Ilham Aliyev have written books. Presidents Robert Kocharyan and Serzh Sargsyan did not write books during their tenure and before that.

“No wife of any leader of Armenia has ever had the influence Anna Hakobyan has. Anna Hakobyan and Nikol Pashinyan have divided the power and financial and economic resources, and rule together. Something that is happening in Azerbaijan because Mehriban Pashayeva is a co-owner of Azerbaijan,” Minasyan said.

As for the parallels drawn by Minasyan between Mehriban Aliyeva and Anna Hakobyan, this comparison is, to put it mildly, inappropriate.

Aliyeva has an institutionalized power in Azerbaijan. Since 2002, she has held several key positions, including three years as Chairperson of the Gymnastics Federation, Head of the Heydar Aliyev Foundation, and member of parliament for three terms.

Since 2013, she has been the Deputy Chairman of the ruling New Azerbaijan Party (chaired by Ilham Aliyev).

In 2017, after the amendment of the Constitution, which introduced the institution of vice president in Azerbaijan, Mehriban Aliyeva was appointed to the post of first vice president by the decree of Ilham Aliyev.

Anna Hakobyan has as much influence in Armenia now as all the first ladies did in the past. In particular, she is the head of two charitable foundations – “My Step” and “City of Smile”.  Former first ladies of Armenia also headed such foundations. For example, the wife of the third president Serzh Sargsyan and Minasyan’s mother-in-law, Rita Sargsyan, was the president of the “Donate Life” Foundation.

Thus, the parallels drawn by Mikael Minasyan are based entirely on false and manipulative claims and, accompanied by emotional expressions, they pursue a primitive but malicious goal to mislead the public.