Both during and after the 2018 revolution, current authorities of Armenia promised from the platforms of revolutionary squares to separate business and politics in Armenia once they come to power, however, now, three years after the revolution, the “Civil Contract” has included major businessmen Khachatur Sukiasyan and Gurgen Arsenyan in its pre-election list. Sukiasyan is number 5 on the list, while Arsenyan, who has sold some of his businesses, is in 14th place.

The Fact Investigation Platform has compiled the information on the businesses related to these two persons from the data of the electronic register of legal entities.

The businesses of Khachatur Sukiasyan and his brothers

Khachatur Sukiasyan has been an active business leader since the mid-1990s, following his resignation from a state position in the Ministry of Industry. Sukiasyan’s success in the business world continued on various scales under all the leaders of Armenia, from Levon Ter-Petrosyan to Nikol Pashinyan. In 1996, Khachatur Sukiasyan together with his brothers Eduard, Robert and Saribek Sukiasyan founded “Sil Concern”, which unites all their businesses. “Sil Concern” includes “Narek” LLC, in which the four brothers have an equal 25% share. “Narek” LLC owns the large shopping center “Russia” on Tigran Mets Avenue in Yerevan and the “Russia Mall” next to it (the opening of which, by the way, was attended by Serzh Sargsyan). The seven-storey mall houses clothing stores, cafes, playgrounds for children, equipment outlets, etc. Active construction works are underway next to “Russia Mall”. “Narek” LLC is building a new giant building. The Fact Investigation Platform referred to this construction earlier, finding out that it was illegal and that the land had been seized. It is not clear yet what complex is being built in this section.

Moreover, “Narek” LLC owns “Sil Building” business center, located a little down the road from “Russia Mall”. “Sil Concern” also founded “Yerevan” fair market, which is located next to Sasuntsi Davit station, on a six-hectare land. Although everyone knows and “Sil Concern” has also confirmed that the fair belongs to them, in the electronic register of legal entities the sole owner of the fair market is mentioned to be Hakob Petrosyan, a resident of Yerevan, who is supposedly one of the Sukiasyans’ close friends. During the opening ceremony of the fair, Khachatur Sukiasyan told reporters that he was convinced that the fair would have success, as it is adjacent to both the train station and the metro. According to those in charge, the investments made for the construction of the fair amounted to 2.5 billion drams. Although it was envisaged that 550 people would be employed at the fair market, according to the data provided by the military insurance fund, the legal entity of the market “Big Fair” LLC has only 70 employees.

Khachatur Sukiasyan and his brothers own Armeconombank OJSC, which is the legal successor of Zhilsotsbank of Soviet Armenia. The Sukiasyan brothers own 71% of the company’s shares and they control the bank’s controlling shares.

The total capital of the bank is about 40 billion drams, and the authorized capital is 26.1 billion drams. “Armeconombank” has 54 branches, and in recent years one of the largest transactions of the bank was the acquisition of the Kazakh BTA Bank in 2016. This year, however, did not start well for “Armeconombank”. According to analysis carried out by Hetq, the bank operated at a loss in the first quarter of this year, amounting to 217 million drams.

Khachatur Sukiasyan’s two brothers, Eduard and Saribek Sukiasyan, have equal shares in “Sport Time” LLC. The company was founded in 2005 and imports to Armenia sport products of the famous German companies Adidas and Reebok, including clothes and sport accessories.

Although the Sukiasyans import the products of this brand to Armenia, it should be noted that “Sport Time” is not the official representative of Adidas.

The Sukiasyans’ interests with Germany are not limited to the import of Adidas.

Khachatur Sukiasyan founded inLobby GMBH in Germany in 2010, which deals with online booking of hotel rooms. inLobby offers booking services for about 150,000 hotels and operates in Armenia as well.  All these companies operate at 3 Aram Street, which belongs to the Sukiasyans. The building was built in 1870-1880 by Sofi Melik-Ohanjanyan and was renovated in 1996 by the Sukiasyans. 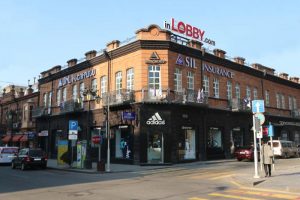 “Sil Concern” also includes two pizzerias of “Pizza di Roma”, one of which is located at 1 Abovyan Street, and the other on Khorenatsi Street. The “Sil Concern” also includes the polyplast factory in Yerevan, which produces linoleum and other items. The concern includes “Sil-maaza” LLC, which was founded in 2012 and produces “Maaza” juices. Legally, the only participant of the company is Armen Manukyan.

2008: The Sukiasyans lose some of their businesses

In the 2008 presidential election, Khachatur Sukiasyan publicly supported the first president Levon Ter-Petrosyan, and was a member of Ter-Petrosyan’s election staff.

After the protests of March 1, 2008, Sukiasyan went underground, was declared wanted, and as a means of revenge, the former authorities started inspections in the Sukiasyans’ businesses։ various charges were brought, while some employees were arrested.

The “Bjni” mineral water factory belonging to the Sukiasyans went bankrupt, the property was put up for auction.

As a result of the second auction, the mineral water factory passed to the former MP, former president of the Football Federation Ruben Hayrapetyan, who had paid 4 billion 441 million drams for the factory.

Khachatur Sukiasyan considered the government’s steps regarding the “Bjni” mineral water factory a political persecution and appealed to the European Court of Human Rights, demanding compensation for the damage caused to his business by the state. Later, the Sukiasyans founded “Sil Mineral Water Factory” LLC, the only participant of which is Khachatur Sukiasyan’s son Albert Sukiasyan.

During that time, Khachatur Sukiasyan sold the “Pares Armenia” company, which was importing cigarettes, and was the representative of the “Philip Morris” brand in Armenia.

“Sil Concern” confirmed the information. So far, however, there are no changes in the list of shareholders of “Ran Oil” in the relevant register of legal entities.

On September 28, 2020, Khachatur Sukiasyan founded and became a sole shareholder in “Global Mining” LLC. It is not yet known what this company does.

Gurgen Arsenyan is known in the political arena of Armenia as the leader of the “United Labor Party” (ULP), who for many years was an MP first from the ULP, then from “Prosperous Armenia” party. Arsenyan has a 51% shares in Eldorado-Armen LLC, which operates a cafe near Liberty Square in Yerevan. 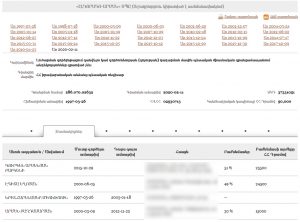 Arsenyan was engaged in the import of tobacco through his “Arsoil” company, later the legal entity was changed, and “Unicorn Trade” company started selling cigarettes, which, according to press publications, was sold together with all Arsenyan’s businesses. This company imported Winston, Camel, and LD cigarettes.

Gurgen Arsenyan’s wife, Edita Gharagyozyan, has a 20% share in “Business Style” LLC, which is engaged in placing outdoor billboards.

On May 25, “My Step” faction MP Hrachya Hakobyan, commenting on Khachatur Sukiasyan’s inclusion in the pre-election list of the My Step, stated that “it is difficult to separate whether Khachatur Sukiasyan is a businessman or a politician.”

On June 20, 2022, the Supreme Judicial Council in a closed session approved and presented to the National Assembly the...

After the Prime Minister Nikol Pashinyan in his lengthy speech in the National Assembly yesterday stated that "the international community...

On January 18, the National Assembly fully adopted in the second reading the draft law "On Non-Cash Transactions" authored by...

On June 20, 2022, the Supreme Judicial Council in a closed session approved and presented to the National Assembly the...

After the Prime Minister Nikol Pashinyan in his lengthy speech in the National Assembly yesterday stated that "the international community...

On January 18, the National Assembly fully adopted in the second reading the draft law "On Non-Cash Transactions" authored by...