“Sputnik’s” Contradictory Materials in Armenia and in Azerbaijan

“Sputnik” news agency, belonging to The “Rossiya Segodnya” international news agency, which is considered the microphone of the Kremlin and which belongs to the Russian government, applies double standards in Armenia and Azerbaijan with regard to coverage of the Nagorno Karabakh conflict, trying to flatter the local audiences. “Sputnik” is a Russian news agency, which targets the foreign audiences and works in 33 languages, including Armenian and Azerbaijani.

Keeping silent about what is being talked about

The policy of the “Sputnik” agency is common for all its websites functioning in different languages. However, the news items of separate news services often contradict each other, depending on the language of publication. Though the slogan of the agency is “We say what others are silent about”, it definitely keeps silent when its interests are not met. The websites of some of “Sputnik’s” services spread the news in two languages, namely, the local language and Russian language. There are considerable content differences even in these two sections of the two websites.

One of the examples is the May 18 statement of Russian Foreign Ministry’s official representative Maria Zakharova about Azerbaijan’s armed forces initiating the attack on the border of Karabakh and Azerbaijan. When citing her, Sputnik’s Yerevan service underlined that the Azerbaijani side had initiated the attack. Part of Zakharova’s speech was also published by the agency’s Azerbaijani service, presenting the Foreign Ministry’s Spokesperson’s view on the situation in the Russian language version. But the Azerbaijani website did not contain information that Azerbaijan had initiated the attack, only quoting Russian state official’s words regarding Russia’s role in the conflict settlement process, and only in the Russian language version.

The terms these two services of the same agency select to cover the topic of Nagorno Karabakh conflict also differ. “Sputnik Armenia” in Yerevan freely calls Nagorno Karabakh “Republic of Artsakh”, while in the agency’s Azerbaijani webpage, Nagorno Karabakh “is an occupied territory of Azerbaijan”. And in “Sputnik Turkey’s” website, Karabakh is presented as a “territory controlled by Armenian separatists and receiving assistance from Armenia”.  It is also noteworthy that the hyperlink to the webpage of the Armenian service is removed from the Azerbaijani webpage. And, similarly, the hyperlink to “Sputnik Azerbaijan” is removed from the Armenian website.

“Sputnik’s” head office is located in Moscow and is headed by leaders of Russian state propaganda Dmitri Kiselyov and chief editor of “Russia Today” agency Margarita Simonyan. The main international webpage of the news agency (in English) is also edited here. Here too, the agency demonstrates an obviously biased approach by adopting a pro-Azerbaijani policy. 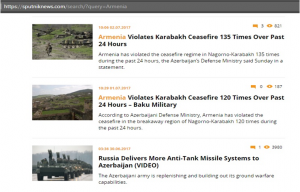 The news agency regularly publishes cases of ceasefire violation by the Armenian Armed Forces, presenting the official information of Azerbaijan’s Ministry of Defense. By failing to present the data published by the Armenian side and not comparing them with the other side’s data, Sputnik becomes an immediate mediator in spreading Azerbaijani propaganda all over the world.

The manipulation of Yerkir.am regarding Pashinyan and ARF assemblies

Citing its sources, “168 Hours” has published an article in its September 24-25 issue, referring to a "growing scandal" over...

On September 14, the Public TV Company broadcast a report on tourism in Armenia, which contains both correct, wrong, and...

Manipulations on the case of Amulsar in Armenian Times Daily