For years, the Armenian press has referred to the property of former Minister of Defense, MP of “Hayastan” faction Seyran Ohanyan, and particularly his mansion. However, the latter has always denied such allegations.

During a press conference in 2017, Ohanyan denied the information about owning a mansion in Vahakni district and insisted that the information in the press about his property did not correspond to reality.

“The information in the media does not correspond to reality. There is only one true thing that Vahagn Hovnanyan gave me a plot of land in Vahakni district years ago, in 2008, but it is no longer mine,” Ohanyan said, noting that he rents a house in Vahakni district.

The Fact Investigation Platform examined Ohanyan’s property and tried to find out how credible the statements made by the MP years ago were.

A mansion registered in someone else’s name

In January 2021, Seyran Ohanyan sent an open letter to Prosecutor General Arthur Davtyan, noting that “he and his family members do not own any building in the Vahakni district.

Dozens of publications have been published in the press about one of the mansions in that district, which was attributed to Ohanyan. It is currently nearing completion.

FIP.am sent an inquiry to the Cadastre Committee to reveal the owner of the mansion.

Thus, according to the data received from the Cadastre Committee, in February 2011, the land in Vahakni district, where the mentioned mansion is currently being built, was purchased by  Zaruhi Tigran Badalyan from Hovnanyan International LLC. 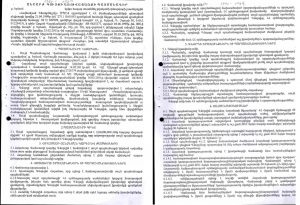 The land is located at 2 Kuchak street, Vahakni district and covers an area of 3700 square meters. It is located right in front of “Shant” artificial lake. 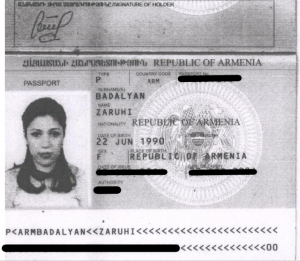 Zaruhi Badalyan is the niece of Seyran Ohanyan’s wife, Ruzanna Khachatryan. This information was obtained from the CEC voter register. 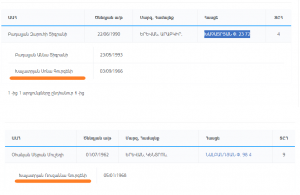 Satellite photos show that the construction in the area started in 2014, and two years later the 3-storey mansion with an area of 2858 square meters was already standing there.

It is noteworthy that in 2018, following the revolution, the media reported that the construction of the mansion had been suspended. Evidence of this are the satellite images, which have not recorded any change in months.

Satellite photos of the mansion from April 2018 to November 2019

The construction continued next year, in November 2019. However, on November 8, Seyran Ohanyan’s sister-in-law, Zaruhi Badalyan, donated the land and the mansion to a French citizen, Jean-Pierre Foveau.

A few days later, on November 12, the new owner applied to the Yerevan Municipality for the legalization of the unauthorized building. On April 20 of the following year, the municipality approved and legalized the unauthorized mansion, obliging him to pay AMD 6 million to the community budget.

According to the documents submitted to the Cadastre, 82-year-old Jean-Pierre Foveau is a French citizen, born in Algeria, living on the Croatian island of Vir. From that day on, Mezhlumyan was involved in all matters related to the mansion as a representative, and Foveau is no longer mentioned in the documents.

It is noteworthy that according to the information received from the Cadastre Committee, the Special Investigation Service applied to the Cadastre on May 21, 2020, requesting to provide the cadastral file of the mansion within the framework of the preliminary investigation of criminal case No. 58158519 (Dzora HPP). It should be reminded that Seyran Ohanyan is a defendant in this case.

According to the press release of the Special Investigation Service, based on the draft of the secret government decision developed by the Ministry of Defense on December 16, 2010, as the body exercising the authority to manage the state-owned share in Dzora HPP CJSC, the Ministry of Defense alienated all the property of the company to “Dzoraget Hydro” LLC for AMD 3.6 billion, when the market value was AMD 4 billion 646 million 400 thousand. As a result, AMD 1 billion 46.4 million worth damage was inflicted on the state.

House for rent without a lease agreement

The building has an area of 498.9 square meters and is located on 1108 square meters of land. It was this address that Ohanyan mentioned as a place of residence in his declaration as an MP candidate.

FIP.am was informed by the sales department of Vahakni district that the price of a 1-month rent of “Ararat-1” private house starts from USD 2500-3000, and the starting selling price is USD 550,000.

However, the private house occupied by Seyran Ohanyan does not belong to Hovnanyan International LLC, but to a Karine Barseghyan. Moreover, although Ohanyan had previously stated that he lives for rent, the lease agreement is missing in the Cadastre documents.

These two private houses, although located in different areas, are at a distance of 500 meters from each other.

So what did he declare?

During the last 3 years of his tenure as Minister of Defense, Seyran Ohanyan submitted 7 declarations to the Ethics Committee of High-ranking Officials, in which, however, he did not declare any movable property, real estate or expensive property. And in the declaration of resignation, he submitted AMD 18 million (11․5 million in 2011).

According to the submitted declaration, all 5 land plots are located in Mrgashen village of Kotayk Province, where Ohanyan’s father’s house is located. This is confirmed by the documents received from the Cadastre, according to which, only in Mrgashen, Ohanyan owns 1 plot of land and 1 private house with the right of joint ownership, and 3 plots of land with the right of ownership. Together, these plots occupy an area of more than 34,300 square meters (3․4 ha).

Besides, Ohanyan also declared 1 plot of land and a building located in Ajapnyak administrative district, as belonging to a third party, but in fact owned by him. The building is mentioned in the declaration as a building that has not yet received state registration or is an unauthorized building. 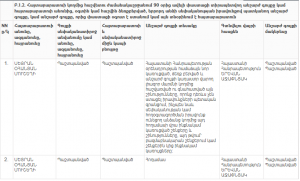 The exact address of the building and the land, their area and the data of the real owner are protected and not available, but in a telephone conversation with FIP․am, Seyran Ohanyan said that it is the private house he rents in Vahakni district, which his friends have provided to him free of charge, and that is why there is no lease agreement.

Seyran Ohanyan’s wife, Ruzanna Khachatryan, did not submit any declaration (in violation of the law).
The last declaration submitted by her was in 2015, in which, however, Khachatryan did not declare the apartments belonging to her, one in Kanaker-Zeytun, Rubinyants street 1, building 1, and the other in Kentron, 98 Nalbandyan street, building 4. The apartments were purchased in 2002 and 2005.

According to cadastral data, currently Khachatryan does not own any real estate. The apartment on Rubinyants Street was donated to her mother Hasmik Melikyan and Marcel Chilingaryan in September 2019, and the apartment on Nalbandyan Street was sold to Karine Margaryan in June 2021 under a deferred payment agreement.

According to the data provided by the Cadastre Committee, Seyran Ohanyan’s son Arthur Ohanyan owns a private house at 38 Mrgashen 6th Street.

To get clarifications, FIP.am contacted Seyran Ohanyan, who answered our question about how his wife’s niece, Zaruhi Badalyan, bought a house for AMD 160 million in 2011, saying that he was not aware and did not want to answer personal questions.

“I have already answered once that that private house is not mine,” Ohanyan added.

“That house is my father’s house, where I am a co-owner. There are also two plots of land that were provided in 1992. They are in the village, I had forgotten about them and did not declare them. Now the procedure for submitting new declarations has changed and that is why I have declared in connection with the village and my parents,” Ohanyan said.

The former Minister of Defense also informed that according to his information, his wife has just received a request to submit a declaration and will do it within a month.

FIP.am also contacted Ruzanna Khachatryan’s sister, Sona Khachatryan, and asked how her daughter had bought a house in the Vahakni district for AMD 160 million. After hearing the question, Mrs. Khachatryan answered that this was not a matter to be  discussed by phone and that she did not want to comment on it,  and then she immediately hung the phone.

Seyran Ohanyan’s misperceived statement: The Yerevan-Goris highway is not under the control of Azerbaijan

Referring to the situation in Syunik during a press conference in the National Assembly on November 16, the head of...

Who Is Lying about Fuel for Tanks

During the Q&A session at the RA National Assembly on March 1, Prime Minister Karen Karapetyan said that the military...

Ohanyan produces self-contradictory statements on the issue of political prisoners

The History of Relations between Raffi Hovhannisyan and Seyran Ohanyan

Seyran Ohanyan’s misperceived statement: The Yerevan-Goris highway is not under the control of Azerbaijan

Referring to the situation in Syunik during a press conference in the National Assembly on November 16, the head of...

Who Is Lying about Fuel for Tanks

During the Q&A session at the RA National Assembly on March 1, Prime Minister Karen Karapetyan said that the military...

Ohanyan produces self-contradictory statements on the issue of political prisoners

The History of Relations between Raffi Hovhannisyan and Seyran Ohanyan