On September 27 the Standing Committee on Foreign Relations of the National Assembly gave a negative conclusion to the draft law, which envisaged setting up a temporary commission to study the benefits and disadvantages of Armenia’s membership in the EAEU. Only a representative of the Yelq fraction of the National Assembly voted for the draft decision proposed by the Yelq fraction. Creation of temporary commission was canceled.

However, a number of local, Azerbaijani and Russian media outlets represented the cancellation of setting up a commission as National Assembly cancellation of the draft law on exit of Armenia from the EAEU.

The misinformation was mostly spread through Russian-language news agencies. Rusarminfo.ru news website published a news release saying that “the National Assembly of Armenia has canceled the offer of the country to exit from the EAEU”. The Russian Embassy in Armenia also published the false information on his official Facebook page. Referring to Rusarminfo.ru the «Armenian voice» also republished false information. Similar articles with titles distorting reality were published by voskanapat.info and times.am news agencies. 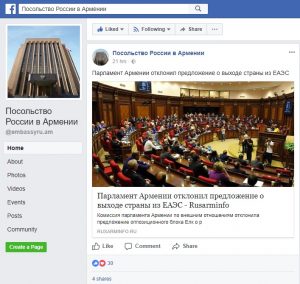 Disinformation about the “cancellation” of the draft law by the National Assembly was also spread by the Russian-language website “Rhythm of Eurasia” and a number of Azerbaijani media, including day.az and trend.az, making the reader confused by the titles.

It should be noted that there was no discussion on the start of the process of terminating the Eurasian Economic Union Treaty by Armenia even at the session of NA Standing Committee on Foreign Relations. The discussion of this issue has been postponed for two months, so we can state that these websites are misleading the public.

“According to the information Zhamanak daily received, the Republican Party (RPA) sends letters to the Francophonie Central Office requesting to...

Politik.am has published a noteworthy article about Head of State Revenue Service David Ananyan, accusing him of embezzlement and use...

In recent days, a number of news websites have been making remarkable publications. The published news articles contain not only...