In order to prevent and neutralize the consequences of COVID-19, Armenia has regularly received financial assistance from international organizations and a number of countries around the world. The Fact Investigation Platform prepared an overview of the volume of international financial assistance provided to Armenia from the date of declaring COVID-19 a pandemic (March 11, 2020) till November 17, 2021. We received the relevant data from the Armenian Government on November 17, 2021.

The EU, the United States and other countries

According to the information provided by the Department for Information and Public Relations of the Office of the Prime Minister, the largest financial assistance to Armenia during this period was provided by the European Union․ A sum of around AMD 15 billion and 134.3 million was transferred to the state budget within the framework of the grant “Fight Against COVID-19: Armenia Contract”. The EU has provided another € 92 million to Armenia, which means both new funding and redirection of existing funds.

€ 38․5 million from that assistance is a loan, which was formed from the restructuring of budget support programs signed in 2015-2017. A € 3 million grant was provided to the World Health Organization to purchase medical equipment and supplies for Armenia. A € 27 million grant was provided to small and medium-sized enterprises through EU financial institutions. As informed by the Government of Armenia, the EU announced the remaining € 24 million in support on 22 December 2020. After a year following the announcement, the executive does not provide details on how these funds were spent.

According to the Office of the Prime Minister, on August 10, 2021, the European Commission decided to increase the assistance package to 75 million to promote the vaccination process in the Eastern Partnership countries. However, the distribution of the funds between EaP countries has not been clarified yet.

In addition, various agencies of a number of EU countries provided separate financial assistance to Armenia. For example, Germany allocated $ 200,000 to Armenia to purchase equipment, tests and other supplies. The Netherlands National Institute for Public Health and the Environment provided $ 233,000 in assistance to Armenia to purchase medical equipment․ The money was allocated to “Nork” Infectious Diseases Hospital. Financial aid from France amounted to € 30,000․ The money was generated on the initiative of the Union of Francophone Mayors and the AGBU.

The Romanian Agency for International Development Cooperation (RoAid) has provided € 10,000 assistance to St. Gregory the Illuminator Medical Center in Yerevan. The Government of Estonia provided € 30,000 in financial assistance to the Children of Armenia Fund to purchase relevant equipment to fight the pandemic.

In addition, 40,000 Swiss francs (approximately $ 44,000) were donated by the Swiss Federal Department of Foreign Affairs to purchase masks, gloves and sampling swab sticks. Another $ 36,000 was provided by the Swiss company Novartis Pharma Services AG to purchase medicines and equipment.

The United States provided $ 5.9 million in financial assistance to Armenia to fight the pandemic, including through the WHO, UNICEF, and the Armenian Red Cross Society. The rest of the money will be used by the United States Agency for International Development (USAID) to provide social assistance to the most vulnerable groups affected by COVID-19, mitigate the economic consequences, promote crisis communication and community involvement in preventing the spread of COVID-19. It is not yet clear what part of this amount has already been allocated and spent, as the Ministry of Foreign Affairs relied on the information as of the beginning of 2021 in providing these data.

Under a grant program signed between the Armenian government and Japan on June 30, 2020, the country provided $ 3.8 million to equip Armenia’s healthcare system with ambulances and “mobile medical clinics.”

China provided a total of $ 130,000 in aid to Armenia to fight the pandemic, of which $ 110,000 was allocated for the purchase of equipment and tests.

Qatar provided $ 250,000, which will be donated to the Center for Disease Control and Prevention to purchase tests. 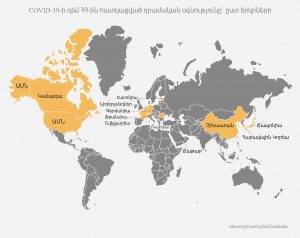 In the fight against the pandemic, Armenia has received assistance and loans not only from states, but also from international funds and other organizations.

Within the framework of the “Emergency Grant Agreement”, the Caucasus Nature Fund provided a grant of about AMD 267․2 million to Armenia.

On August 27, 2020, Armenia received around $ 2․5 million in grants from the Asian Development Bank within the framework of the “COVID-19 Response Program”. We were also informed by the Office of the Prime Minister that in 2020, around $ 2.05 million was spent on the purchase of medical supplies and equipment, and about $ 118,000 were spent in 2021.

$ 3 million was provided by the Eurasian Fund for Stabilization and Development․ The money will be distributed between regional medical center modernization and public awareness programs.

Within the framework of the Disease Prevention and Control Program agreement signed between Armenia and the World Bank on March 31, 2020, a $ 3 million grant and an additional AMD 23 million were provided for the purchase of equipment, vehicles, medical clothing, and other medical supplies.

The UN COVID-19 Response and Recovery Multy-Partner Trust Fund, established on April 3, 2020 at the initiative of the UN Secretary-General, provided approximately $ 1 million in assistance, as well as equipment and supplies to Armenia through a number of UN agencies. The World Health Organization has provided $ 80,000 to Armenia.

On May 23 and June 1, 2020, the Republic of Armenia and the International Monetary Fund signed a loan agreement on the use of reserve program funds and the attraction of additional borrowed funds, which envisages a loan of about $ 315 million to Armenia.

* The assistance provided in different currencies during the pandemic is expressed in US dollars at the current exchange rate or at the average exchange rate for the year. 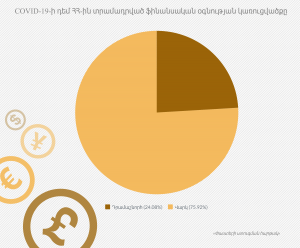 The government informed that all the assistance received was aimed at meeting the needs of the healthcare system due to COVID-19, enhancing preparedness and ensuring rapid response.

In addition, allocations were made from the state budget of the Republic of Armenia for measures to reduce and eliminate the economic consequences of COVID-19. In 2020, these allocations amounted to AMD 107․4 billion, and AMD 33․3 billion in the 9 months of 2021.

In addition to financial support, Armenia has received a large amount of humanitarian aid from different countries and organizations. We will refer to them in our later publications.

Since the first round of vaccination against coronavirus, law enforcement agencies have repeatedly reported about fake vaccination certificates issued to...

Omicron: what do we know about the new variant of coronavirus?

Recently, in Armenia, as all over the world, a new variant of coronavirus, Omicron, is actively spreading, which is considered...

What is a booster (the third vaccine dose) and how necessary is it?

With the emergence of the Omicron variant of COVID-19 in November 2021, the pandemic gained new momentum. To control the...

A brief overview of vaccines used in Armenia

Since the first round of vaccination against coronavirus, law enforcement agencies have repeatedly reported about fake vaccination certificates issued to...

Omicron: what do we know about the new variant of coronavirus?

Recently, in Armenia, as all over the world, a new variant of coronavirus, Omicron, is actively spreading, which is considered...

What is a booster (the third vaccine dose) and how necessary is it?

With the emergence of the Omicron variant of COVID-19 in November 2021, the pandemic gained new momentum. To control the...

A brief overview of vaccines used in Armenia