At the end of October, Twitter social network banned advertisements of “Russia Today” and “Sputnik” Information Agency on its website. The ban was enforced due to the “interference” of these two media outlets in 2016 US presidential elections. However, “Russia Today” can place its ads on other networks like Facebook, which it does, but not conscientiously. By dividing its audience into target groups, the Russian state media recruits subscribers by using the users’ emotions and lack of attention to details.

Currently, Russia Today is spreading the advertisement of its page in the Armenian segment of Facebook by using the photo of Shavarsh Kocharyan, the man who saved 20 passengers of the trolley-bus that fell into Yerevan Lake in 1976. The photo is entitled “Put a like if you are proud of him”. However, in this way, the user subscribes to RT news rather than likes the photos. 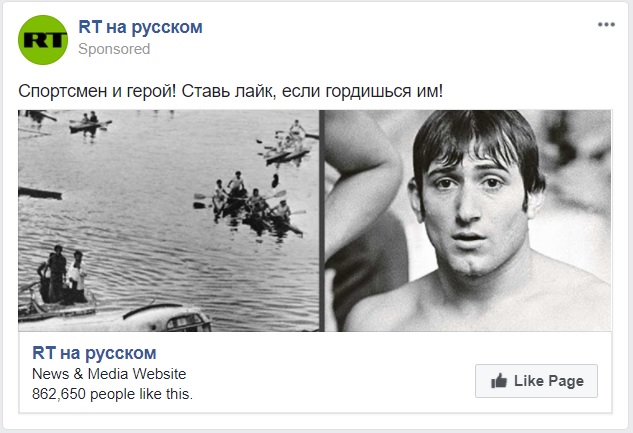 What is “Russia Today”?

RT is an international media outlet which is fully funded by the Russian Federation. The international service of the TV station is broadcast in the English language in the US and the UK. Apart from English, RT is broadcast in Arabic and Spanish languages as well. Broadcasts in German and French languages were also envisaged by the year 2014. However, due to the crisis caused by the depreciation of the Russian ruble, the projects were cancelled.

Nevertheless, the RT website has French and German versions. Though the media outlet presents itself as an “alternative” news media, it is generally perceived as a propaganda machine promoting the state position and interests of Russia. Projects called “RUPTLY” and “In the Now” also belong to RT, as well as “RT Documentary” that produces documentary films.

RT is famous as an instrument of Russian state propaganda. Its audience is mainly composed of foreigners. It is also envisaged for Russians living outside of Russia, as well as for Russian speakers. The aim of the TV station is to provide a “view from Russia” about news of international importance, as well as events of local significance. Since 2009, Russia Today has started to call itself RT in order to reduce the obviousness of Russian influence.

Russia allocates an annual amount of 300 million USD for the maintenance of the TV station. RT never provides critical coverage of the activity of Russian government or President Putin. On the contrary, it spears no efforts to create a negative image of western politicians. And Putin is introduced as a world-renowned and respected state figure.

Another issue is that RT very often turns to manipulations, disinformation and fake news in order to promote the favorable views.

How “Russia Today” Tricks the Audience

Since March, Russia Today has launched a fact-checking website, which has issued 18 publications during 9 months. However, Russia Today itself very often spreads fake news.

There are hundreds of revealed cases of disinformation and fake news disseminated by RT, as well as dozens of cases of broadcast of staged reportages. One of the recent examples is the reportage published on the eve of Vladimir Putin’s birthday on October 6. In the video, RT tells about the burger that was served in honor of Russian president in one of the restaurants of New York. After the publication, it was revealed that such a burger was not served in the given restaurant, and the TV station had staged the reportage with the participation of two employees of the restaurant. A few hours later RT deleted the reportage from its YouTube channel because of “inconsistency with editing criteria”. However, sections of the video about the “Putinburger” had already been broadcast and continued to be broadcast by “Rossia 24” and other TV stations.

Earlier SUT.am had also written about RT’s false coverage of the incident on NTV live that took place during the Airborne Forces celebration day.  RT had presented the incident in a completely different light, by calling the Russian man who was guilty of the incident a Ukrainian.

Disinformation about “Teaching about Incest” at Schools

Putin’s missiles were considered the “latest weapon” in 2007 as well.

EU vs Disinformation campaign fighting against pro-Kremlin disinformation referred to the coverage of Russian media on President Vladimir Putin's statements...

A number of Russian media outlets reported about a flashmob in Europe entitled "Forgive me", which allegedly involved rape victims...

Petition against the monument to Nzhdeh full of lies

The fuss (or even hysteria) around Garegin Ter-Harutyunyan’s (Nzhdeh) personality and activity fails to subside among certain Russian circles. They...

Russian propaganda even spreads lies about a robot

The most famous human-like female robot in the world, Sofia, has appeared in the spotlight of the Russian media. It...

Disinformation about “Teaching about Incest” at Schools