The whole logic of organization of electoral processes consists in that political forces participating in elections present their election programs with their vision of Armenia’s development to the public, and the public makes its choice based on these programs. However, very often election programs merely serve propaganda purposes and are never fulfilled.

One of the most vivid examples is the election program presented by Serzh Sargsyan during 2008 presidential elections. Not only have its target indicators failed to be ensured before 2012, but also many of them remain unfulfilled till today. The following is a brief outline of what promises the RA president made before coming to power and to what extent they have been fulfilled.

In macroeconomic terms, Sargsyan’s team had promised to bring nominal GDP to 5.57 trillion AMD by the year 2012. However, the statistical data show that GDP in Armenia amounted to only 3.99 trillion AMD in 2012, which is 18% less than promised. Moreover, preliminary data show that GDP in 2016 formed 5.06 trillion AMD, increasing by only 0.2% compared to the previous year. This means that the Republican Party of Armenia has failed to ensure the promised economic growth even during their second term.

Similarly, the promised increase of exports to up to 3.8 billion USD was not ensured. According to statistical data, exports did not exceed 1.8 billion USD as of 2016, which means that only half of the target indicator was reached during 9 years.

Under circumstances of continuous growth of RA external debt, the authorities have also failed to ensure the promised increase in consolidated budget expenditures till 1.33 trillion AMD. In 2012, RA budget expenditures amounted to 1.03 trillion AMD even under circumstances when social extrabudgetary funds were included in the state budget in 2008, thereby artificially increasing the amount of the budget. 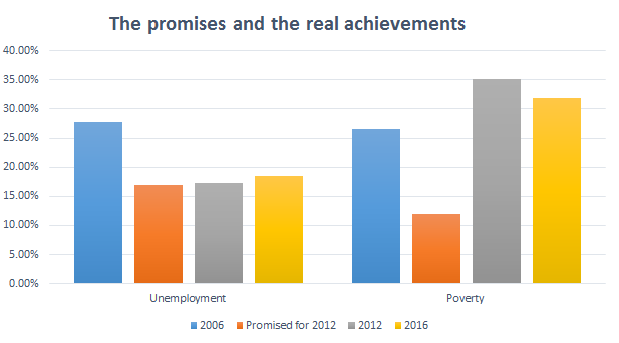 Based on the aforementioned data, it would take small efforts to make an informed guess about the change dynamics in standard of living in Armenia. First and foremost, the unemployment rate has not declined in Armenia notwithstanding the large-scale emigration from the country, and has remained at the level of 18.5%. In parallel, the fight against poverty has been extremely ineffective. In 2008, Sargsyan’s team promised to reduce the poverty rate to 11.9%. However, today 31.8% of the Armenian population are poor, 2% out of which continue to remain extremely poor.

Thus, we can claim that the authorities have failed to reach their proposed target indicators in all major economic directions. And most probably, this is the reason why the Republican Party has avoided giving promises “in figures” in its election program for 2017 parliamentary elections.