Head of “VETO” social-political movement Narek Malyan states that they do not publish false information. However, Fact Investigation Platform has revealed a number of inaccuracies and false information in Malyan’s statements.

Yesterday, on June 11, another protest took place in front of the Yerevan office of Open Society Foundations (OSF). The initiator was again the VETO social-political movement founded by Narek Malyan, the advisor to the former Chief of Police Vladimir Gasparyan, co-author of the “Adekvad” program.

During the protest, Malyan made a series of statements, which were fact-checked by FIP.am.

Addressing his words to the OSF-Armenia office, Malyan said: “You and your mercenaries hate the Armenian Apostolic… Armenian Holy Apostolic Church.”

This statement is strange since the Open Society Foundations has even provided a grant to the Armenian Apostolic Church. In particular, in 2010, the Armavir Diocese received a $ 25,000 grant for organizing a summer camp for 130 socially vulnerable children.

Narek Malyan stated that they demand from the RA authorities to “kick out OSF [from Armenia], as it was done in Israel, as it was done in Hungary, as it is being done in the US.”  Yesterday Malyan also claimed that “There is a large list of countries where the activities of this office are simply forbidden.”

Malyan also called the claim of the Head of OSF-Armenia Office Larisa Minasyan that OSF is forbidden “only in countries having a reputation of authoritarian leadership” a lie. “It is not true. For instance, Mrs. Larisa calls authoritarian Israel or the USA where at this moment very serious blocking actions are taking place”, he added.

However, OSF activity is not banned in Israel. The Foundation has never had an office in that country but provides grants to non-governmental organizations engaged in issues related to the Israeli-Palestinian conflict and different issues in Israel.

As for Hungary, the OSF office was really closed there in May 2018 due to pressure by the authorities. Hungarian Prime Minister Victor Orban, who has been in office since 2010, is considered the most authoritarian leader in the EU. For the first time in the last decade, Hungary has been classified as “partly free” in the 2019 Report of Freedom House. It is the only EU member country that does not have the status of a “free” country according to Freedom House.

As noted by the head of the OSF Armenia office Larisa Minasyan, the activities of the OSF are blocked when any “authoritarian society or a society going in that direction sees a danger.” Thus, the OSF activities have been suspended or banned in Belarus in 1997, in Uzbekistan in 2004, in Azerbaijan in 2014, in Russia in 2015, and in Turkey in 2018.

OSF in the USA

Speaking about the OSF activities in the US, Malyan stated that “the District Attorney of Philadelphia, who is a famous Soros man and during whose office crime rate in the State of Philadelphia has increased several times, is shamed at the state level in the United States today.”

First of all, note that Philadelphia is not a state but a city in the state of Pennsylvania.

The OSF has two offices in the US, one in the capital Washington and the other in New York. Both offices work without any problems.

He has not been “shamed at the state level” in the US. Recently William McSwain, Attorney for the District Court for the Eastern District of Pennsylvania, accused Krasner of turning Philadelphia city into a “laboratory” as a district attorney funded by Soros.

Malyan also stated that “none of the human rights defenders under Larisa Minasyan’s rule” addressed the detention of Artur Danielyan, head of “Adekvad” NGO by the Police on June 10.

This statement also does not correspond to the reality. Artur Sakunts, head of the Helsinki Citizens’ Assembly-Vanadzor, who regularly receives grants from the OSF, referred to Danielyan’s detention on his Facebook page the same day and stated that “the RA Police should first publish the grounds for detaining Artur Danielyan, immediately provide him with a lawyer and properly inform the public about all the actions related to this case.”

Finally, let us address the poster held by one of the protestors. The poster depicts OSF founder George Soros and President of Azerbaijan Ilham Aliev, and has the writing “Best Friends” on it. 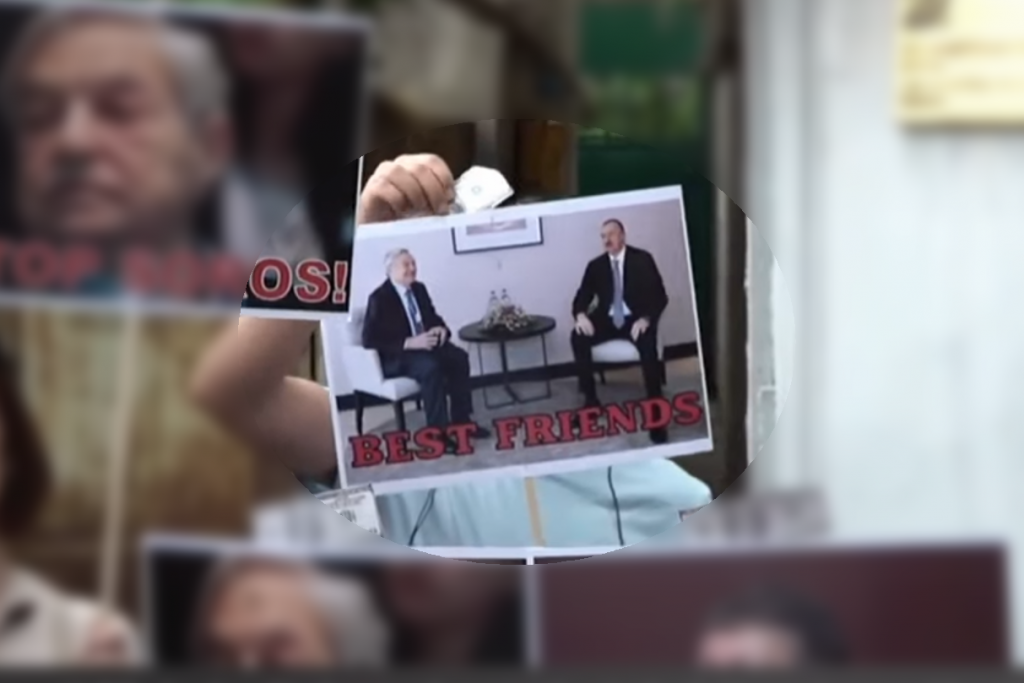 FIP.am addressed this statement in the past, noting that Soros was extremely critical of Aliev’s regime in 2016, calling it an “unpleasant, dictatorial one.” Moreover, the OSF Baku office suspended its activities in 2014, months after the Azerbaijani authorities froze their bank accounts and seized their computers.

It is noteworthy that Narek Malyan insisted that they did not publish any false information that does not correspond to reality, and that the information they publish is “always verified, accurate “.

A total mess: Channel 5 attributes a poll conducted by campaign headquarters to an international organization

During the Haylur program of Channel 5 on March 17, a report entitled "Who will residents of Artsakh vote for?"...

The article “The Sumgait tragedy: How it started and how it happened”, published on the website of the Russian Nezavisimaya...

Former head of the National Security Service David Shahnazaryan referred to the Nagorno-Karabakh conflict settlement process and made a number...

Sexuality does not change after being vaccinated: Explainer on manipulative reporting by Channel 5

During the December 16 Haylur program on Channel 5, the chairperson of Healthy Society NGO Marina Khachatryan stated that the...