Who are the investors in the Firdus District?

On June 11, it became known that City Center Development CJSC, which organizes the construction and sale of the area in the Firdus district of Yerevan, is carrying out demolition works. The company demolished a tuff structure attributed to the late 19th-century. The same fate awaits the brick building in the same area.

By the decisions of the government in 2007-2008, the Firdus district and the surrounding area were recognized as eminent domain, and expropriated to the City Center Development Company for construction and sale.

It is planned to build a circular square, business and residential complexes in the area. The architect of the project is former Minister of Urban Development Narek Sargsyan, and the developer has been obliged to provide compensation and apartments in the new complex to be built to the residents of Firdus district, whose houses were subject to expropriation due to overriding public interest. In March 2018, by the decision of the government, the area was divided into 18 lots and handed over to various organizations named after toponyms of Western Armenia, the legal predecessor of which was “City Center Development”. 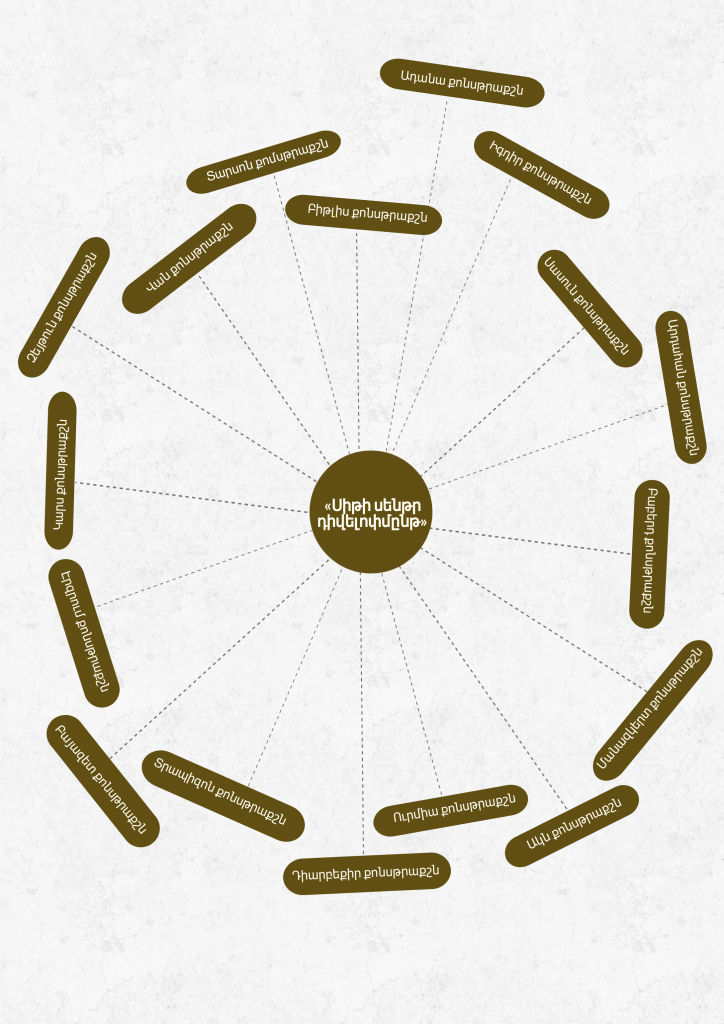 The Fact Investigation Platform tried to find out who stands behind the companies involved in the construction of the Firdus district and adjacent areas.

Only in two of the companies do we see other shareholders. Thus, Melikyan transferred his share in “Van Construction” company to Zaven Sargsyan in 2019. In 2015-2019, the latter was a 50% shareholder of Arpisolar, a company that produces solar panels and solar water heaters. We meet Sargsyan’s name in the list of participants of “Isotop Delta” LLC. The company operates Syunik-1 HPP in the Kashatagh region of Artsakh. Zaven Sargsyan has a 7% share here. Members of the ARF Dashnaktsutyun leadership Hakob Ter-Khachaturyan (1.5 percent), David Lokyan ( 5 percent), Levon Mkrtchyan ( 5 percent), Hrant Margaryan (2 percent), and Vahan Hovhannisyan’s son Hayk Hovhannisyan ( 5 percent) also have shares in this HPP.

The owner of another lot in Firdus district is Erzrum Construction Company. In 2019, the shares of the company passed from Eduard Melikyan to Yurik Khachatryan, a citizen of Russia. In other companies, either “Dianar” or Eduard Melikyan is a shareholder. The latter was also the director and shareholder of Glendale Hills (areas in the center of Yerevan recognized as eminent domain were expropriated to the latter, but the company did not fulfill its obligations towards the citizens). The company is currently bankrupt. We cannot rule out that Zaven Sargsyan and Yurik Khachatryan are among the investors of the 33rd District.

Eduard Melikyan about the investors of the 33rd District

Eduard Melikyan told the Fact Investigation Platform that in 2019 negotiations were held and local and foreign investors were involved in the construction of the district (11 people). According to Melikyan, one Kazakh company and one American company are also interested in investing in the area of the Firdus district. Melikyan gave the names of several investors, who, according to him, are going to take part in the construction of the district. Here are some of them:

Vahe Petrosyan is not an unknown person in the field of construction. He is the chairman of the Armenian Association of Developers NGO, has a 57% share in Logicon Consulting, and is a shareholder in a number of construction companies, including Artcompany, Solar City, and D&H Group. All these companies are engaged in the construction of residential buildings and districts.

The next investor that Melikyan informed about is Ruben Karakhanyan. Fact Investigation Platform had previously referred to Karakhanyan, when presenting a corruption scheme. According to the scheme, the “Continent Tex” company, which is engaged in sewing and supplying police uniforms, was intentionally led to bankruptcy, and the area was expropriated to “KR Construction” LLC, founded by Karakhanyan, which was obliged to build the Passport and Visa Department building in Davtashen administrative district, and renovate the buildings of the police departments in Gyumri and Nubarashen. The deal came to the attention of law enforcement authorities, a criminal case was filed on the grounds of damage caused to the state, in which the former director of “Continent Tex” company was the defendant. However, the Police were not able to identify him, and the case was dropped.

“KR Contruction” LLC was founded in 2009. The only shareholder of the company is currently Karen Karakhanyan, who received the share from his brother, Ruben Karakhanyan. Karakhanyan owns the “Degustation Food” cafeteria on Komitas Avenue, as well as “Mobiline” LLC, which, in turn, owns the Swarovski and Egoiste stores in Yerevan, as well as the “Safari Arms” store.

Armen Mkoyan is a well-known figure in the field of construction. He is the chairman of “Elite Group“, and owns “Elite Plaza” business center in the center of Yerevan. “Elite Group” has built “Jermuk Resort”, “Best Western Aghveran”, and “Elite Villa” complex in Tsakhkadzor. According to the website of “Elite Group”, the company is currently in the process of building residential complexes. One of the projects of “Elite Group” is the Northern Ray Complex consisting of 276 apartments, which stretches from the Cascade to Zaryan and Babayan streets. Mkoyan has a share in Elenex LLC, which operates a small HPP on the Aghstev River (16.5% of the company belongs to Mkoyan).

The other investor in the 33rd District is Vahe Harutyunyan, who is also involved in the construction sector. He owns Gradshininvest LLC, which is currently in the process of being recognized bankrupt. The company has been engaged in construction in the center of Yerevan, building a residential complex at Buzand 99.

One of the shareholders in Gradshininvest was Pavel Anderson, who presented years ago the corruption schemes through which he received construction permits. Anderson told Hetq that he received them through former mayor Yervand Zakharyan, and Karen Davtyan, director of the Northern Avenue Construction PIU.

Harutyunyan is the director of “GM Developer” company. In 2017, Civilnet reported that the government had approved the company’s investment plan to build a residential building on Buzand Street, as well as a new building instead of the old building of the Yerevan Theater and Cinema Institute. The owner of the company is Mamikon Ginosyan, a US resident.

“GM Developer”, in its turn, is a shareholder in “Serge-Agopig Der-Sahaguyan” LLC, which is one of the developers of the “Old Yerevan” project implemented on the Main Avenue, and owns real estate in that area. “GM Developers” has a 35% share in this company, and Vahe Harutyunyan used to have (later he alienated it) a 45% share.

In addition to the above-mentioned persons, according to Melikyan, the American company “Six Tower City” is interested in investments (we will refer to the activities of this company in the near future – ed.).  It should be noted that there is no company with such registration in Armenia. According to Eduard Melikyan, a Kazakh company, whose name he did not remember, has also made investments. In total, the investment program for the construction of the 33rd District is estimated at $ 300 million.