A strangely complicated architect: Meschian’s promises during the two years vs. reality

Throughout his last two years in office, Meschian stood out with tough stances on urban development issues, and sometimes contradictory statements. The Fact Investigation Platform has decided to refer to Meschian’s statements made during the two years, the changes planned in the city and the results.

Meschyan has often referred to the need to build a new metro station and cable car in Yerevan. He has repeatedly stated that the construction of the Ajapnyak station should have started by the beginning of 2020. According to Meschyan, there were investors to finance the construction of the metro station, who had to build residential houses or a shopping center in the area of the station. “The metro is the only facility that will always raise money, because it is a very important facility. There will be investors here, we are working with them now. Investors will probably be included in the plan to build new residential buildings for sale, a certain percentage of which will be given to the metro,” Meschyan said at a news conference summing up his 100 days in office.

Earlier this year, the Fact Investigation Platform inquired whether the deadlines set by the city authorities were met and at what stage the negotiations with investors were. The municipality informed that the investing company is known, and the works will start in the spring.

So far, however, no concrete steps have been taken to start construction of the new metro station. Besides, at the press conference held on August 4, Mayor Hayk Marutyan announced that the new metro station will be built not with investors’ money, but with state funds. “We have taken on the task of organizing the tender. When we have the design, we will put it up for tender. There will be an open tender, the winning construction company will build the metro station. At the moment, Terms of Reference for a two-stage tender are being prepared,” he said.

The spokesperson for the mayor told Fip.am that at the moment they cannot specify the dates of commencement of the works. 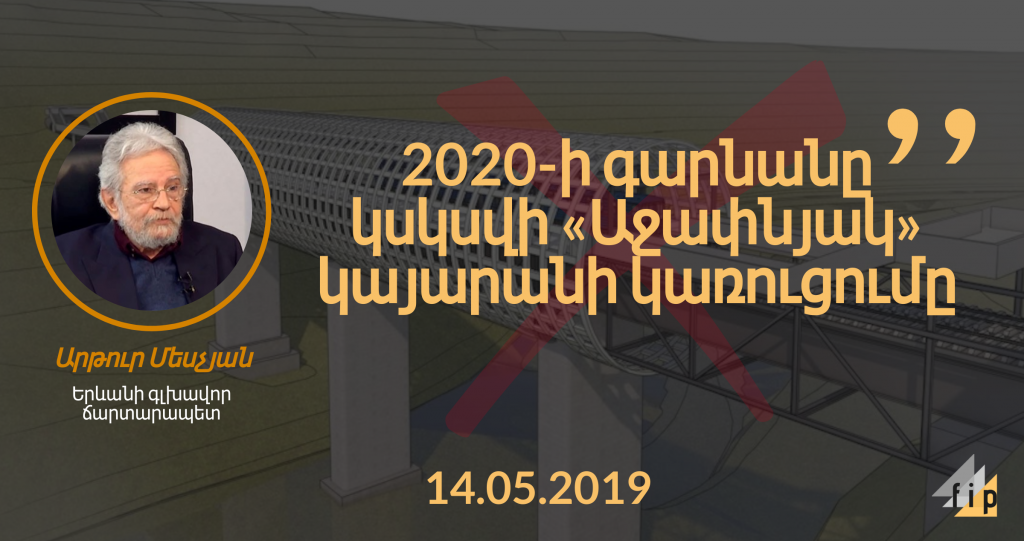 The cable car connecting Nor Nork to Kentron

At a meeting with journalists on May 14, 2019, Meschyan stated that the construction of a cable car connecting the 2nd block of Nor Nork in Yerevan to Kentron is more affordable than the metro, and can be built faster. “The connection will be from the 2nd Block to the dormitory area of the former Polytechnic Institute. […] There will be further development to Victory Park, but the initial task is the connection between Nork and the city center,” the city’s chief architect said.

In fact, the design and construction works of the ropeway have not started yet.

An end to illegal construction and land occupation?

After assuming the post of chief architect, Meschyan often spoke about ending the vicious practice of illegal construction and land occupation in Yerevan. He was quite harsh in his speeches, promising that those who were engaged in illegal construction would face serious problems.

Meschyan claimed that illegal construction was the worst form of land occupation. “Land occupation is theft from the country, it is theft of property of all of us, the land occupation is over. Do not occupy a single square meter of land, because you will have a problem. If you hope that you can legalize it in the future, forget about it, it will not happen,” the chief architect announced in November.

Although Meschyan threatened not to legalize illegal construction and land occupation, facts point to a different picture. Fip.am recently published an article on how the new city authorities legalized the construction that has been going on without permission for several years near the Russia shopping center. “Narek” LLC, owned by former MP and businessman Khachatur Sukiasyan, was carrying out illegal construction not only on the land it owned, but also on the land owned by the community. As a result, the municipal authorities sold the community land to “Narek” LLC.

A high-rise building in “Fizgorodok”

The residents of the community have been fighting against the construction of an apartment building at 6/1 Alikhanyan Brothers, Ajapnyak administrative district of Yerevan for a long time. During a meeting with community residents and member of Yerevan Council of Elders Levon Zakaryan, Meschyan assured that no high-rise apartment building would be built in “Fizgorodok” district. This was also confirmed by Levon Zakaryan. “As a member of the Council of Elders, I had a discussion with Mr. Meschyan and several residents of the area, and knowing that there are more than 500 signatures against the construction of the building, he said that a high-rise building should not be built in the area, although it is a controversial issue.”

However, on July 20, the municipality issued a design permit (ToR for and architectural plan) to Ratko LLC for the construction of a 12-storey apartment building.

The building of “Little Singers of Armenia” children’s philharmonic located at 23 Aram Street was on the verge of collapse in September 2018 due to the construction work carried out next door. The building is included in the list of immovable historical and cultural monuments and is protected by the state. In November 2018, Arthur Meschyan announced that Aram 23 would not be demolished, but due to inaction, the wall and roof of the building collapsed on January 12, 2019.

On January 23, the chief architect announced that the issue of Aram 23 had been “resolved.” According to Meschyan, a tripartite contract was signed, according to which the developer had to pay 14 million AMD to an Italian architect for design works.

In May of this year, Meschyan announced that the sketch of Aram 23 was approved by the municipality, and the further process is beyond the competence of the municipality. “I do not understand what is happening there. They had developed a program worth 200 thousand euros, where is that 200 thousand euros. Who will give it? It is one hundred percent under the [competence of] Ministry of Culture … the ball is in their court. ”

Today the wall of Aram 23 building is still collapsed, and there is no information about the restoration works. 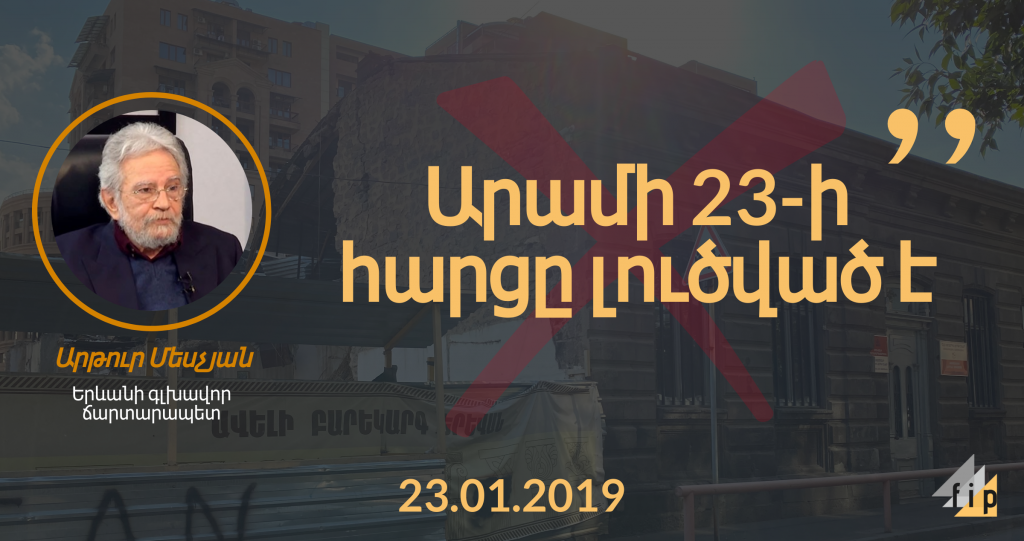 In November 2018, referring to the land of the Youth Palace demolished in 2006, Meschyan said that he planned to meet with the owners of the area to resolve the issue. “..Because I think that land has remained in a deplorable state for too long,” Meschyan said.

Meschian’s next statement on this issue in May 2019 was not encouraging. “There is no chance to meet with the developer at all. There is simply no physical possibility to meet, talk, understand what the program will be like, and in general, whether there will be a program or not,” Meschyan stated.

The land is still in a deplorable condition, and there is no information about works planned in the area.

Thus, assuming the position of the chief architect of Yerevan in 2018, the architect, composer Arthur Meschyan, in fact, made promises and announcements, which two years later either were not fulfilled or were canceled.

The restoration of the Nork forest is progressing slowly

The Chief of Staff to the Prime Minister Eduard Aghajanyan announced on his Facebook page on November 4, 2019 that...

Illegal construction “under the nose” of Ajapnyak district municipality

Illegal construction has been taking place since the spring 2020 on the community-owned land near 10 Margaryan Street, Yerevan, Ajapnyak...

The restoration of the Nork forest is progressing slowly

The Chief of Staff to the Prime Minister Eduard Aghajanyan announced on his Facebook page on November 4, 2019 that...

Illegal construction “under the nose” of Ajapnyak district municipality

Illegal construction has been taking place since the spring 2020 on the community-owned land near 10 Margaryan Street, Yerevan, Ajapnyak...