In recent years, political forces have opened fake accounts or so-called “fake factories” on social networks in order to create the illusion of major public support. These groups systematically like, comment on, or share cerain publications.

The Fact Investigation Platform has already revealed a number of groups of fake accounts created to form an artificial positive opinion about a politician or a party.

You can get acquainted with them here:

Recently, a large group of fake accounts has obviously become more active, supporting the Republican Party on various Facebook pages and in the comments of news publications. Today we will present the activity of 150 fake accounts from that group. Note that this number is not final, and it cannot be not ruled out that it is much larger. Only the fake accounts that are currently active have been studied.

While studying the activities of this army of fakes, we noticed clear similarities between the style of comments, which proves that they are directed and coordinated by a small group of people from one center. This is also proved by the fact that the given fake accounts comment only on specific publications, exclusively in Armenian, and they do not operate separately. 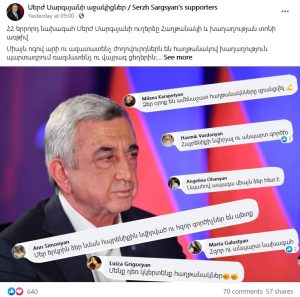 The framework of activity

The “Republican” fakes are most active, expressing their support on the Facebook pages supporting the RPA leader, the third president Serzh Sargsyan, and regularly leaving dozens of comments under the publications related to the Republican Party.

The topics of comments vary, but mainly fakes work in two directions, praising Serzh Sargsyan in every possible way, and slandering and accusing other opposition forces and the current government. 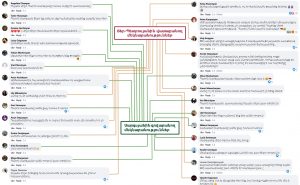 These fakes became active about two years ago, starting from the second half of 2019, and during this period, they are quite active in various Facebook news platforms and groups.

It is noteworthy that these fake accounts were reactivated after a certain pause since December 4, 2020, when the Homeland Salvation Movement issued a statement on starting its activities. It should be reminded that the Republican Party was also one of the parties participating in the movement.

The statement was published on the Facebook page of the movement in the afternoon, but did not receive a response for about 5 hours. However, starting from 17:30, there were dozens of comments in support of the movement, all of them by fake users. More than 60 comments were made in about three hours.

From that moment on, during the whole activity of the movement, the fakes expressed their support, sharing calls on various platforms to participate in the rallies of the movement.

However, the scope of the activities of the fake users is not limited to this․ They also support other figures. A vivid example is the article on Tert.am about the former ambassador, Serzh Sargsyan’s son-in-law Mikayel Minasyan, under which 70 out of 73 comments were made by fake users.

This group of fakes also supports other figures of the Republican Party on Facebook, especially Armen Ashotyan, Hayk Mamijanyan, Eduard Sharmazanov, Artak Zakaryan and others. The links provided are comments from fake users.

And recently, these fake users also support the former head of the National Security Service, the leader of the “Homeland” Party Arthur Vanetsyan, after he formed an alliance with the RPA called “I have the honor” bloc. Fake users often comment on PAP member Ashot Andreasyan’s posts, who has close ties with the Republican youth.

The fake users are also active under posts of major media outlets. In their comments, they try to create the illusion of public support, and in some cases, they express their dissatisfaction with certain publications.

Most of the fake usernames are “female”. The reasons for this practice are clear. Female accounts quickly gather an army of friends, followers, and their pictures instantly receive many likes and comments, which can give the impression that the account is real.

The pictures used in the fake accounts belong to other people, mainly taken from Vkontakte, Instagram social networks, from the pages of Russian and Georgian girls on dating sites. Often, however, pictures of Armenian girls are also used.

Fake users also comment on each other’s pictures, trying to create the impression of a real user. 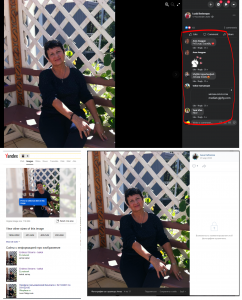 Both the old woman and commentators are in fact fake accounts, and the picture is taken from the page of a Russian woman, Anna Nabokova, who has nothing to do with the domestic political life of Armenia or the Republican Party.The same approach is used with men’s fake pages․

In this case, a group of fakes mention that they allegedly spent time together somewhere. The accounts of both the three men “mentioned” in the post and the other two women who left comments are fake. 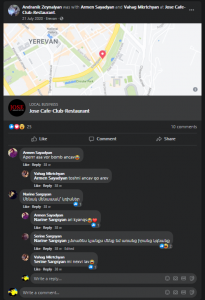 The fake users of this group can be easily distinguished by the similarity of the comments they make. Thus, for example, there are 125 comments under the post with Serzh Sargsyan’s picture, only 5 of which belong to real users.

Fake users can also be distinguished by searching for “personal” photos of their pages on the Internet, although the search does not always yield results. The reason is the modification of images, the placement of “filters” on them, which makes it difficult for search engines to identify the pictures.

In such cases, you just need to study the list of friends and the likes.

The friend lists  of the fake users are partially identical, and, as expected, they are also in each other’s friends’ or followers’ lists. It is noteworthy that the majority of the observed fakes’ friends or followers include representatives of the RPA youth, as well as former RPA officials.

One of the commonalities easily identified in the accounts of the army of fakes of the Republican  Party is the liked pages.

The list of pages liked by almost all of them includes the pages of former RPA deputies Eduard Sharmazanov, Armen Ashotyan, Artak Zakaryan, pages and groups dedicated to the third president, namely, Office of the Third President of the Republic of Armenia, Serzh Sargsyan’s supporters, Return, Mr. President, as well as the official page of the Homeland Salvation Movement and a number of pages engaged in openly anti-government propaganda, such as “Disclosure“, “Nikol is not my Prime Minister“, etc.

By visualizing the pages liked by fake users, their number and orientation, we get the following image:

Some fake users often make similar posts or share the same photos at the same time with the same caption.

Some of these fake users are “used” to share the publications of the RPA members in open Facebook groups. Such groups often have tens of thousands of members.

This type of fake users do not publish on their personal pages, do not leave comments, are often deleted, and replaced by new ones. The reason is that Facebook algorithms sooner or later detect the phenomenon of making similar posts in different groups, qualifying it as spam, after which the user account is blocked. Some of the fake users we identified have already been blocked.

The same is done for Armen Ashotyan and other RPA representatives.

In addition to praising the third president and the Republican Party, Republican fakes engage in hate speech, calling for violence, “beating,” “burning,” “physically liberating the country from certain people,” and so on. 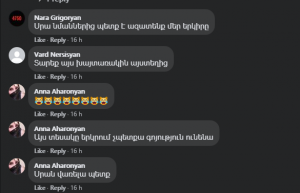 It is difficult to say where these fakes are guided from. However, our investigation yielded some results. Examining the accounts of this group of fake users, in one of them we came across a screenshot taken from an Instagram page. The photo was published by a fake account called Lana Martirosyan. It is noteworthy that from the lower part of the published screenshot, it is clear who made it.

Our investigation showed that it was published by user Maria Karapetyan, who is from the “Serzh Sargsyan Supporters” team, is active, comments on the same publications that are commented by the fakes we discovered. 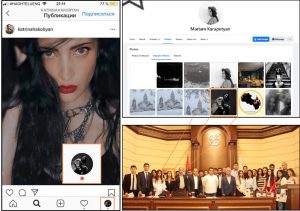 This team is managed by the Facebook page of the same name, where fake users are very active. The admins of the “Serzh Sargsyan’s supporters” team are representatives of the RPA youth Mikael Grigoryan, Henrikh Danielyan and Vahe Movsisyan. The latter are on the list of friends or followers of most of the fakes we found. Fake accounts are often engaged in praising and supporting them.

Thus, we can state that an army of fakes consisting of about 150 users is actively operating on the Facebook social network, trying to create the illusion of public support of the Republican Party, in particular, Serzh Sargsyan.