The geopolitical “biochemistry” of aggression

On March 12, more than two weeks after the invasion of Ukraine, the Russian Federation convened a meeting of the UN Security Council to discuss “US-developed chemical and biological weapons in Ukraine”․

Permanent Representative of Russia to the United Nations, Vasily Nebenzya, stated that during a special operation in Ukraine, shocking evidence was revealed about the biological weapons program by Kyiv, “directly coordinated and financed by the US”.

“Documents have been made available to the Russian Armed Forces testifying to the fact that a network of at least 30 biological laboratories has been set up in Ukraine to carry out extremely dangerous biological tests. They are aimed at enhancing the properties of the pathogens of plague, anthrax, tularemia, cholera, and other deadly diseases.”

During the same Security Council meeting, US Ambassador to the UN Linda Thomas-Greenfield denied Moscow’s accusation that US-backed biological weapons laboratories were operating in Ukraine, saying that Russia had convened a Security Council meeting “solely for the purpose of lying and spreading disinformation.” Referring to the UN rapporteurs, Thomas-Greenfield stated that the organization is not aware of any evidence about chemical and biological weapons being developed in Ukraine. “Last month, US Secretary of State Blinken described sadly accurately what Russia intends to do. He warned that Russia was going to generate allegations about chemical and biological weapons in order to justify its brutal attack on the Ukrainian people.”

Referring to Russia’s accusations, NATO Secretary General Jens Stoltenberg stated in an interview with Welt am Sonntag newspaper that Moscow itself intends to use chemical weapons in Ukraine․ “Now that these false claims have been made, we must be vigilant because it is possible that Russia itself could plan chemical weapons operations under this fabrication of lies.”

The Fact Investigation Platform has combined open source data on the development and use of chemical and biological weapons by Ukraine and Russia.

Which countries have been accused of using chemical weapons?

The development and use of chemical weapons is prohibited under the Convention on the Prohibition of the Development, Production, Stockpiling, and Use of Chemical Weapons and on their Destruction adopted on 3 September 1992․ It has been joined by 193 countries, with the exception of Egypt, North Korea and South Sudan. One state, Israel, has signed but not yet ratified the convention.

The use of biological weapons is also prohibited by the Convention on the Prohibition of the Development, Production and Stockpiling of Weapons Containing Bacteriological (Biological) and Toxin Weapons and on their Destruction․ It entered into force on June 7, 1994.

According to the Arms Control Association, only eight countries have declared their stockpiles of chemical weapons upon joining the convention. According to an international non-governmental organization, most of these countries have destroyed or undertaken to destroy such weapons.

Since the adoption of the Convention, there have been instances of chemical weapons being used by various countries, or instances of states being suspected of using such weapons of mass destruction.

Chemical weapons were widely used during the civil war in Syria․ According to the UN and international human rights organizations, such weapons were used not only by the Islamic State terrorist organization and other groups, but also by Syrian government forces. Although the United Nations launched a program to destroy chemical weapons in Syria from the very beginning of the conflict, it did not save the Syrian people from dozens of such deadly attacks in the future.

There are also many credible reports on the Internet about the use of chemical weapons by the army of NATO member Turkey in the Kurdish-populated areas of northern Iraq. It is reported that the Turkish army has targeted Kurdish forces more than 300 times with chemical weapons.

The factor of chemical and biological weapons has often been the subject of geopolitical manipulation in the hands of superpowers. For example, the United States and the United Kingdom justified the 2003 invasion of Iraq with the creation of biological and chemical weapons by the regime. The then Prime Minister of the United Kingdom Tony Blair assured that British intelligence had compelling and accurate information about the creation of such weapons. But years after the Iraq war, he declared that “their intelligence was wrong”. 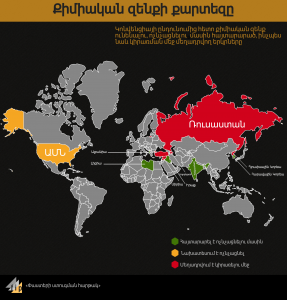 Prohibited weapons against political opponents of the Kremlin

Russia joined the Convention on the Prohibition of the Development, Production, Stockpiling, and Use of Chemical Weapons and on their Destruction on December 5, 1997. At the time of its accession, Russia claimed to have 40,000 tons of chemical weapons, the largest known batch of such weapons in the world at the time.

In September 2017, the Organization for the Prohibition of Chemical Weapons (OPCW) announced that Russia had completed the process of destroying all stockpiles of chemical weapons under their supervision. Nevertheless, since the start of Russian-led hostilities in Ukraine on February 24, 2022, the United States and NATO have accused Moscow of intending to use biological and chemical weapons in Ukraine.

The first high-profile incident took place on November 1, 2006, when Alexander Litvinenko, a former member of the Russian special services and a harsh critic of Russian President Vladimir Putin, was poisoned by a radioactive isotope Polonium-210 in a London cafe.

During his time in London, he wrote the books Blowing Up Russia: Terror from Within and Lubyanka Criminal Group, in which he criticized the Russian special services for organizing the bombings of residential buildings in Moscow in 1999 and a number of other terrorist acts. According to Litvinenko, they were connected with bringing Putin to power. Litvinenko died 22 days after the poisoning on November 23 in a London hospital.

Litvinenko’s poisoning was investigated by several groups․ The Council of Europe and official London believed that the Russian government agencies were behind it. As early as 2021, the International Court of Human Rights upheld the allegations, ruling that the Russian Federation was responsible for Litvinenko’s assassination.

The next act of possible use of chemical weapons by Moscow took place on March 4, 2018, in Salisbury, Great Britain․ Former Russian special services officer Sergei Skripal and his daughter Yulia were poisoned near their house with a chemical weapon called “Novichok”.

The British government blamed the Russian Federation for the incident, and British law enforcement agencies even identified two Russian special services officers who carried out the assassination attempt.

Despite compelling evidence, official Moscow has repeatedly denied the allegations. Margarita Simonyan, a prominent representative of the Kremlin propaganda machine, even interviewed the suspects, who introduced themselves as fitness trainers.

The Kremlin was also suspected of using “Novichok” after August 20, 2020, when Alexei Navalny, a prominent Russian opposition figure, was poisoned during a flight from Tomsk to Moscow. The US Department of State stated at the time that it believed that Navalny had been poisoned with “Novichok” by Russian special services.

Unlike Russia, there are no open sources on the destruction of chemical weapons stockpiles by official Kiev. Ukraine was accused of selling chemical weapons to Azerbaijan during the war unleashed by the latter on September 27, 2020 in Nagorno Karabakh.

On October 31, 2020, the Nagorno Karabakh Defense Army announced that the Azerbaijani Armed Forces had used phosphorous bombs containing elements of chemical weapons. It was followed by allegations in the Armenian media that the weapons were supplied to Baku by Ukraine.

Russian-Armenian director Sarik Andreasyan addressed the President of Ukraine, his former colleague Vladimir Zelensky, and demanded an explanation. In a reply letter, Zelensky denied allegations that he had sold chemical weapons to Baku.

Since the start of the Russian-initiated hostilities in Ukraine on February 24, these allegations have become more active in Armenia. The fact-checking website Euvsdisinfo.eu wrote that the Kremlin propagandists were responsible for the fake news. “Besides, no disseminator of pro-Kremlin disinformation has presented any compelling evidence to substantiate their allegations about Ukraine.”

In the past, Russia has repeatedly criticized the United States for “military-biological activity” near its borders and promised to achieve transparency in the activity of those laboratories.

In addition to Ukraine, biological laboratories modernized with US support also operate in Georgia, Armenia and Kazakhstan.

Back in 2016, manipulative information about the activities of these laboratories in Armenia was disseminated by some organizations․ The Fact Investigation Platform referred to these allegations in 2016. According to the claims, US-funded laboratories in Armenia allegedly pursue “suspicious” goals, maybe the goal of creating biological weapons that can be used against the population of Armenia.

FIP.am has also revealed that those laboratories receive funding from Russia as well. Thus, under the agreement between the governments of Armenia and Russia on technical and financial assistance to Armenia within the framework of EEU membership, Russia provided 14 types of devices and equipment and laboratory furniture for the sanitary-chemical laboratory to the “Reference Laboratory Center” of the “National Center for Disease Control and Prevention” SNCO․

Besides, within the framework of the same agreement, 2 mobile laboratories equipped with modern equipment were provided to the “National Center for Disease Control and Prevention” SNCO for improvement of laboratory capacities related to especially dangerous infections (for carrying out field studies), and rapid response to outbreaks․

In 2021, the Foreign Ministers of Russia and Armenia Sergey Lavrov and Ara Ayvazyan signed a memorandum on biological security issues.

And the press secretary of the Ministry of Foreign Affairs at that time Anna Naghdalyan reaffirmed that the biological laboratories operating in Armenia belong to Armenia and are completely controlled by the Armenian public authorities.

“The Armenian side has repeatedly stated that the staff of the laboratories consists only of the citizens of the Republic of Armenia, the presence of foreign specialists in the territory of the laboratories is excluded,” the Foreign Ministry spokesperson said.

Thus, the Kremlin, which accuses the world of creating and using chemical and biological weapons, has used these banned weapons against its political opponents, according to investigations by many countries and international organizations and international court rulings. These weapons of mass destruction were used by the government of Syria, an ally of Russia, as well as against Nagorno Karabakh by Azerbaijan, which recently signed a strategic alliance with Russia.

Initially Putin promised not to order a military call-up (video)

On the morning of September 21, 2022, Vladimir Putin announced a partial military mobilization throughout the country. Before this, the...

In the period between August 20 and September 7, 2022, a number of false and manipulative claims regarding the Russian-Ukrainian...

Initially Putin promised not to order a military call-up (video)

On the morning of September 21, 2022, Vladimir Putin announced a partial military mobilization throughout the country. Before this, the...

In the period between August 20 and September 7, 2022, a number of false and manipulative claims regarding the Russian-Ukrainian...