Hayk Marutyan, Mayor of Yerevan, announced on 1in.am on August 2 that there is a park in the capital that was turned into a pit. It was privatized under the name of the former district governor’s daughter (40: 25-41: 20).

“People are showing up saying this is my land, I want to build a building here. I look into all of them, and once I see something suspicious I open Google Earth application where one can view the historical image. You go back and what you see is a big park that has turned into a pit,” Marutyan said, adding that the area was designated as park in the master plan, but was alienated for unknown reasons.

“It was alienated, but to whom it was alienated is the question. It was privatized under the name of the former district governor’s daughter,” Marutyan added (11:21:20). Marutyan mentioned in the interview that he had suspended the procedure and sent the case to the prosecutor’s office.”

Who and how took possession of the park

Who is Ruben Gevorgyan?

Gevorgyan later joined the Prosperous Armenia Party led by Gagik Tsarukyan and became a PAP deputy in 2009. In 2012, Gevorgyan was re-elected under the PAP proportional list. He left the PAP in 2017. Ruben Gevorgyan’s relatives have almost always held positions in Davtashen district administration. His nephew Arthur Gevorgyan was the head of Davtashen district administration from 2008-2012, and from 2012-2018 the position was taken over by his another nephew, Ruslan Baghdasaryan.

How was the park privatized?

By the decision of Suren Abrahamyan, the mayor of Yerevan at the time, made in October 1998, the municipality recognized Gevorgyan’s ownership of the self-constructed buildings and rented out the land he occupied. Gevorgyan paid AMD 577,770 to legalize illegal buildings. By 1999, Gevorgyan had already rented the entire park of 6452.68 square meters for 15 years.

According to the signed contract, the tenant was allowed to carry out capital construction in the park and the annual rent was only 262,194 drams (21,850 drams a month).

A week after signing the lease contract, Gevorgyan applied to Yerevan Municipality to privatize the park. The municipality approved the application in 2000. The land with a total surface of 6452.68 m2 and buildings of 499 m2 surface became Gevorgyan’s property.

It is noteworthy that measurement documents of 2000 indicate that the area is a “public park.” But in in a letter to the head of the Davitashen Cadastre Department in August 2002, Boris Kocharyan, Deputy Director of the Department of Architecture and Urban Planning of the Municipality of Yerevan, wrote that the plot “is a land with intended use of public construction according to the detailed plan of the district and is not included in the list of restrictions of RA Land Code, Article 60.”

Article 60 of the Land Code of the Republic of Armenia adopted in 2001 prohibits alienation of state and community owned boulevards, parks, gardens, etc.

“Hetq” had written that Ruben Gevorgyan had put this park known as Daisy on sale in 2011. In addition, this area is designated as a public green space in the zoning project of the Davtashen district posted on the Municipality website. 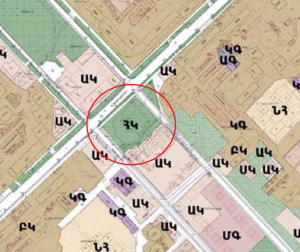 “The trees were dry and rotten. Even if there were no rotting trees, I had the right to cut down the trees I had planted or plant them upside-down or lay them down. It’s my own area and park,” Gevorgyan said.

He noted that at that time the police had not filed any case because “when they came they saw it had been a private property for 20 years, there was a construction permit in place and afterwards they left.”

Multifunctional complex instead of the park

The new city authorities in Yerevan, however, have not given the company permission for construction. The Municipality informed Fact Investigation Platform that “the documents of detailed design were not fully submitted. Simultaneously the grounds for land allocation are being examined.”

The Municipality has sent the materials on the grounds for land allocation to law enforcement bodies to investigate.

In fact, one of the largest green areas of Davitashen has now turned into a pit. Whether there will be multifunctional buildings here or the park will be restored remains to be seen.

How far are the investments “promised” by Avinyan

On November 5, 2019, referring to the allegations of decline in emigration, former prime minister and economist Hrant Bagratyan claimed...

The opening of the Gavar textile factory remained a mere promise

Former head of the National Security Service David Shahnazaryan referred to the Nagorno-Karabakh conflict settlement process and made a number...

What is the point of not printing a cash register receipt for a restaurant owner? Arshak Zakaryan provides misleading information

Prime Minister Nikol Pashinyan wrote a post on his Facebook page on February 4, referring to an incident in one...

How far are the investments “promised” by Avinyan