The campaign for the 2021 snap parliamentary election has come to an end. The “fake factories” operating on social networks have a special role in this campaign, that is to try creating the impression of great public support and trust for concrete political forces. These “factories” are engaged in spreading various propaganda, thus trying to influence public opinion.

On February 6, 2021, the second president of Armenia and the leader of the “Hayastan” bloc Robert Kocharyan, in an interview with “Sputnik Armenia”, speaking about the current authorities, stated that “they are people whose main concern is the number of likes on Facebook, for them the homeland is virtual realities and social networks. ”

However, the investigation of the Fact Investigation Platform revealed an “army of fake users” consisting of about 200 Facebook accounts campaigning for the “Armenia” bloc and Kocharyan, as well as numerous other Facebook pages. Their working style and similarities were studied.

The list of fake accounts discovered during the investigation is not final, it is possible that their number is much bigger. The list includes only currently active systematic operating accounts.

This group of fakes operates on different platforms – on Kocharyan’s official Facebook page, in the comments of various media outlets and other pages. The main activity of these fake groups is to praise the second president and the bloc led by him, as well as to accuse the current authorities of high treason.Fake users do not refrain from hate speech or insulting dissident citizens in comments. 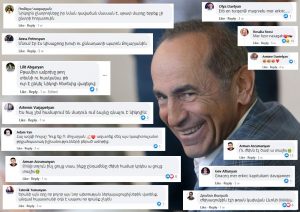 In addition to commenting under various pages, the fake users are also actively publishing campaign posts and videos through their fake Facebook accounts.

Pay attention to the account names and the time the posts were made.

As a rule, the fake users share the same post within the same time span, with difference of minutes or even seconds. The names and pictures of the accounts change, but their content is completely the same.

The Fact Investigation Platform has already addressed this fraud earlier.

Most of the user accounts were created in the Summer 2020 and May 2021, although the list includes fake accounts that were created years ago. Nevertheless, most fakes have something in common- their profile pictures and cover photos were updated from May 17 to 19 with the frame of the “Armenia” bloc.

The comments of the fake users working in favor of Kocharyan have clear similarities in the syntax of writing․ Similar spelling and punctuation errors can often be found in them. 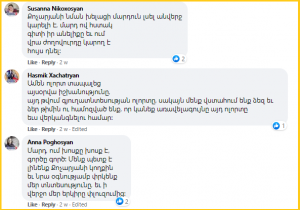 Personal information used in the fake accounts is taken from other people’s accounts, however it is rather difficult to determine the real users of these accounts. The reason is the editing of the photos and the use of different photo filters because of which the search systems cannot identify the real person in the photos.

In contrast to the fake factories we have previously identified, which operate in favor of the Republican and Prosperous Armenia parties, the current photos of fake users are more realistic and convincing.

Sometimes these fake accounts failed photos or with poor quality and most often it is difficult to immediately identify them as fake. Nevertheless, the photos are mostly taken from real users of social media who have Armenian, Russian or Georgian origin. Most of the time the photos are taken from the accounts on the Odnoklassniki and Instagram. But here, too, the lack of comments under the pictures expose the fakes.

For example, in this case the fake users used the photo of Russian girls, presenting on of them as dead. 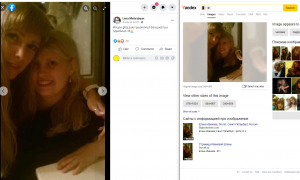 Of course resident of Russia Elina Ivanova has no connection neither with Armenia nor with Robert Kocharyan’s supporters.

Fortunately, the fakes do not have the right to vote in the elections, but this fact did not prevent them from putting a lot of effort in creating accounts ․ The names of many of them are real and the only ones in the voter register. In many cases, both the first name and the last name and the place of residence coincide. In other words, everything was done to be perceived as real users. 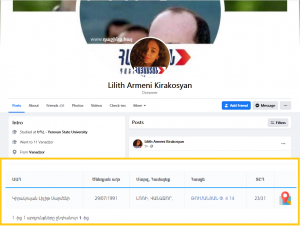 Such Facebook pages have been active since August 2020, after Kocharyan’s pretrial detention was changed on August 13 in the framework of the “March 1” case, and he was released.

On August 19, the “Alliance of President Kocharyan’s Supporters” page was created. After that, at least 15 pages were opened, which in one way or another promote Kocharyan’s political line and criticize his opponents, led by Prime Minister Nikol Pashinyan.

The pages constantly make comparisons between Kocharyan and Pashinyan, in particular the comparison is regarding their achievements, stand in the Artsakh negotiations, military past, built tunnels, airports, avenues, length of roads, and number of bridges built. 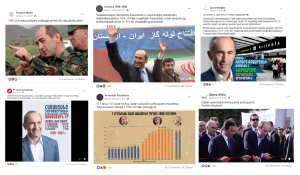 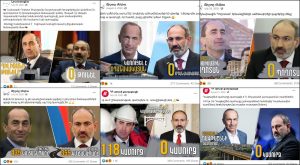 Three pages shared similar pictures, in which Kocharyan is presented as a “strong man” who created “good times”, and Pashinyan – a “weak man” who created “bad times”. Thus, in fact, starting from 2018, these pages have pushed Kocharyan’s political line, often not openly, presenting themselves as impartial platforms.

Long before the June 20 elections, these pages were conducting an online campaign in favor of Kocharyan, and already after the election date was set, the pages have been openly and explicitly campaigning.

The link between the pages

The pages praising Kocharyan, which were viewed by Fip.am, are as follows:

These 15 pages in total have almost 125,000 likes. All page moderators (“admins”) are from Armenia. Most of the pages – nine, have more than 10 moderators, which is quite a large number, it can be assumed that at least as many people are involved in ensuring the continuous operation of those pages.

As can be seen from the examples above, there are many similarities between page publications. Many of them published pictures with almost the same or very similar content.

From the dates of the creation of the pages, it becomes clear that there is a certain connection between them; they are presumably managed from one center or, at least, from affiliated centers, which are united by Kocharyan.

Thus, it should be noted that there is a “fake factory” consisting of about 200 fake accounts on Facebook, which tries to imitate public support for Robert Kocharyan and the “Armenia” bloc led by him. In addition, Facebook pages have been opened that are constantly campaigning for the second president.

Reminder, the Fact Investigation Platform has already made a number of publications, revealing groups of fakes carrying out political activities on social networks.

Former presidents are right․ The rate of emigration has increased

During the pre-election period, political forces and figures often talk about the difficult social situation and safety issues in Armenia,...

The mayor of Goris is abusing administrative levers before the elections

The head of Goris community, parliamentary candidate Arush Arushanyan significantly increased the financial assistance provided to the residents before the...

In recent years, fake accounts supporting political forces or figures have become quite active on social networks. In this respect,...

Former presidents are right․ The rate of emigration has increased

During the pre-election period, political forces and figures often talk about the difficult social situation and safety issues in Armenia,...

The mayor of Goris is abusing administrative levers before the elections

The head of Goris community, parliamentary candidate Arush Arushanyan significantly increased the financial assistance provided to the residents before the...

In recent years, fake accounts supporting political forces or figures have become quite active on social networks. In this respect,...