Fact Investigation Platform has revealed that the notorious Facebook page “Dukhov Hayastan” was run by Armen Ab, who is affiliated with the Republican Party.

The Fact Investigation Platform of Union of Informed Citizens NGO has previously addressed fake pages several times and has illustrated with examples what impact some publications of such pages have on credulous readers.

In the Armenian platform, “Dukhov Hayastan” (later renamed “Dukhov-Hayastan Open Society”) Facebook page was especially distinguished. Head of the NSS Artur Vanetsyan announced about the arrest of its admin on April 5.

Publications of the page

Unlike other pages, the “Dukhov Hayastan” page often contains provocative publications, some of which may be perceived as an attempt to instill hostility and to create an atmosphere of hatred. The page contained especially intense fraudulent publications on Nikol Pashinyan, Ararat Mirzoyan, Alen Simonyan and Daniel Ioannisyan.

Particularly, one could see on the page that allegedly Armenian citizens were shot dead by sniper on the Iranian border, or 102 Russian military base soldiers killed a 3-year-old child. Publications on going to the 17 August 2018 rally armed or turning off or destroying gas safety systems were even more dangerous.  This page even made a publication on sale of drugs, providing as contact number the phone number of Deputy Speaker of the RA National Assembly Alen Simonyan.

Last year a criminal case was launched at the National Security Service under Article 226 of the Criminal Code on charges of spreading religious hatred through “Dukhov Hayastan” page. On April 5 Head of NSS Artur Vanetsyan announced that the admin has been detained. A few days later that person was arrested.

We were officially informed by the NSS Investigation Department that the administrator of the “Dukhov Armenia” page was Armen Avag Ab, born in 1979, dual citizen of Armenia and Iran (2), registered in Yerevan. 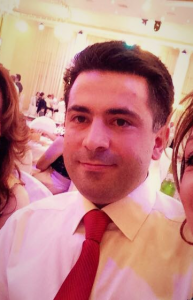 He also has a photo with Hovhannes Galajyan, editor of “Iravunk” newspaper belonging to former Republican MP Hayk Babukhanyan, and Lilit Khachaturova, member of the “Reformists” party associated with the name of Robert Kocharyan.

Lilit Khachaturova, whose real name is Lilit Khachatur Hovakimyan, took part in an anti-government flash mob on October 26, the organizers of which had used fraud to draw more people to participate in the flash mob.

Ab possibly has connections with some of the authorities in Artsakh. This is demonstrated by the circumstance that Ab actively participated in the protest that took place in Liberty Square on February 26. The Fact Investigation Platform had demonstrated links between the protest and authorities of the Republic of Artsakh. On that day Ab demanded from our team not to cover the protest with a drone on behalf of the organizers of the rally.

It is noteworthy that Ab shared the call published on “Dukhov Hayastan” page to gather in front of Yerevan State University to take a selfie with Nikol Pashinyan (by highlighting the words “open society”), and interpreted it as a call of “Soros supporters” to incite civil clashes and violence (since Narek Malyan had also convened a press conference in front of the university at the exact time). But as it has already been revealed, Armen Ab was behind the call and not the so-called “Soros supporters”.

Is there change in the attitude of the international community towards electoral processes in Artsakh?

Former deputy speaker of the National Assembly and head of the Legal Education and Oversight NGO, which carried out an...

On March 26, the British Daily Mail published an article entitled “Up to 14 per cent of the recovered coronavirus...

A total mess: Channel 5 attributes a poll conducted by campaign headquarters to an international organization

During the Haylur program of Channel 5 on March 17, a report entitled "Who will residents of Artsakh vote for?"...

The article “The Sumgait tragedy: How it started and how it happened”, published on the website of the Russian Nezavisimaya...